‘Trying to survive’: Wells dry up amid Oregon water woes

Since then, their life has been an endless cycle of imposing on relatives for showers and laundry, hauling water to feed a small herd of cattle, and desperately waiting for a local well-drilling company to make it to their name on a monthslong waitlist.

The couple’s well is among potentially hundreds that have dried up in recent weeks in an area near the Oregon-California border suffering through a historic drought, leaving homes with no running water just a few months after the federal government shut off irrigation to hundreds of the region’s farmers for the first time ever.

Officials have formal reports of 117 empty wells but suspect more than 300 have gone dry in the past few weeks as the consequences of the Klamath River basin’s water scarcity extend far beyond farmers’ fields. 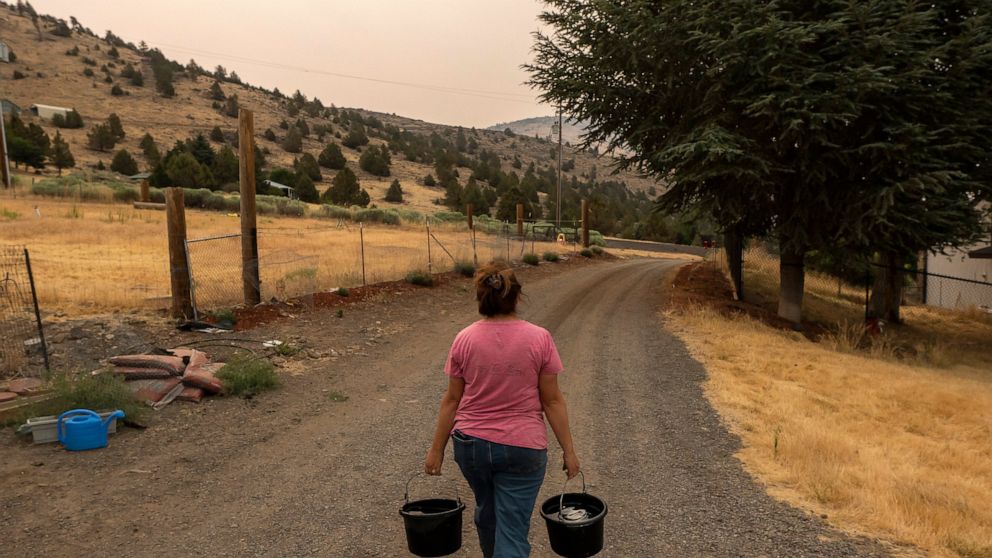 Worried homeowners face waits of six months or more to get new, deeper wells dug because of the surging demand, with no guarantee that those wells, too, won’t ultimately go dry. Some are getting by on the generosity of neighbors or hauling free water from a nearby city. The state also is sending in a water truck and scrambling to ship more than 350 emergency storage tanks from as far as Oklahoma amid a nationwide shortage of the containers due to drought-induced demand across the U.S. West.

Judy Shanks, a volunteer ambulance driver, and her husband survive on 5-gallon (19-liter) jugs she fills at her mother’s house and have already sold several cows.

“Come December, if we don’t get some storms in here and we don’t see any changes, I’ll probably sell everything because we can’t hang on,” she said.

While much of the West is experiencing exceptional drought conditions, the toll on everyday life is particularly stark in this region filled with flat vistas of sprawling alfalfa and potato fields and normally teeming wetlands.

This summer’s already critical water shortages have been amplified by a mandate to preserve water levels for two species of endangered suckerfish in a key lake that’s also the primary source of irrigation water for 200,000 acres (80,900 hectares) of farmland.

“It’s kind of hard to look forward and see good things,” said Justin Grant, a farmer who lost irrigation water and whose home now also has a dry well. “I’m trying to wrap my head around how to get through the season.”

In the past, water from Upper Klamath Lake was released each spring from a dam-controlled by the U.S. Bureau of Reclamation and flowed into a vast network of irrigation canals. That system feeds fields converted from marshy lakes to arable land by the government more than a century ago.

The amount of water allocated to farmers varies yearly based on lake levels, and already in recent years, it has been reduced. This year, however, the bureau said because of deficient lake levels caused by severe drought, it could not release any water at all without imperiling the suckerfish. Now, some farmers are drawing instead from deep wells that dot the region, depleting groundwater at the shallower depths tapped by homeowners.

“This is something that you don’t really think of having to deal with in a country like ours,” said Klamath County Commissioner Kelley Minty Morris. “It’s unimaginable to me even though it’s going on right in my community.”

Some water also leaks from the irrigation canals every growing season, superficially replenishing the groundwater. But those canals have run dry, said Brad Kirby, the Tulelake Irrigation District manager, just south of the California border.

Oregon’s Water Resources Department, which monitors groundwater levels, recorded the lowest water inflow ever into the Upper Klamath Lake this spring, setting the stage for a disastrous summer.

And there is no guarantee the groundwater will fully recharge when it rains and snows again. In 2010, another year when farmers pumped a lot of groundwater because of drought, the aquifer dropped permanently between 4 and 5 feet (1.2 to 1.5 meters), he said.

“You can see how interconnected all of this is,” Gall said, calling it a “cascade effect” of competing demands. Irrigators drawing on groundwater have irked some homeowners, but the overwhelming focus of anger in this conservative, Republican-leaning community has been the U.S. government and the Endangered Species Act.

Some acknowledge global warming’s role, but most say they are victims of bad government policy in what’s been framed as a battle between farmer and fish. Now, homeowners are in the mix.

“I don’t want to get political about this because I understand everybody’s desire — we’re all just trying to survive. But the environmental policies have killed us here,” said Shanks, the ambulance driver. “We have a drought; I do not deny that. But we have an even worse man-made drought.”

The two species of suckerfish have been listed as federally endangered since 1988 and are of critical cultural importance to the Klamath Tribes, which have fought for decades to preserve them. The tribes’ studies show that the fish will disappear from the lake within a generation if nothing changes.

“Archeological evidence has us here for 14,000 years. Our world view, our traditional world view, is everything was placed here for a purpose, including us, and those fish that were created for us were to provide for our subsistence,” said Klamath Tribes Chairman Don Gentry.

With fields and now wells drying up, and the fish struggling, everyone is wondering where to go from here. On Memorial Day weekend, Nathan Buckley was on a camping trip when his wife called him to say their sprinkler had stopped running and the kitchen faucet was dry.

A pump specialist told them they had an inch (2.5 centimeters) of water left in their 180-foot (55-meter) well. The only solution, he said, was to dig a more deep well — but well-drilling companies in the rural region are few, and the wait for service is at least six months.

The Buckleys are now hauling up to 45 gallons (170 liters) of water a day from neighbors for their four horses, a miniature pony, and 14 goats that their daughter shows competitively. They have borrowed a 550-gallon (2,080-liter) water tank that they use for limited showers and laundry; Nathan Buckley hauls it into town every five days on a borrowed trailer to fill it up.

Buckley has spent weeks pulling records and using Google Earth to map every well within a quarter-mile (0.4 kilometers) of his house and now knows his own well is about a quarter-mile from a dry irrigation ditch.

Some homeowners, however, take an even broader view as their lawns die and they pay tens of thousands for new wells. “You hear the word ‘unprecedented’ so many times that it loses its impact, but really, this is not normal,” said Roger Smith, a retired fish biologist who also must dig a more bottomless well after he went dry this summer. “There’s been anger in the Klamath Basin for so long,” he said. “If this goes on for a few more years, some of these small communities will cease to exist.”