As the month came to a close, we saw a bunch of solid tech deals across the web. Amazon’s latest Echo Dot is down to just $30, and you can still save up to $200 on Samsung’s Galaxy S21 smartphones. Fitbit’s Mother’s Day sale is in full swing, bringing record-low prices to many of its wearables, and May the 4th sales began early this year with discounted Star Wars Instant Pots. Here are the best tech deals we found this week that you can still get today. 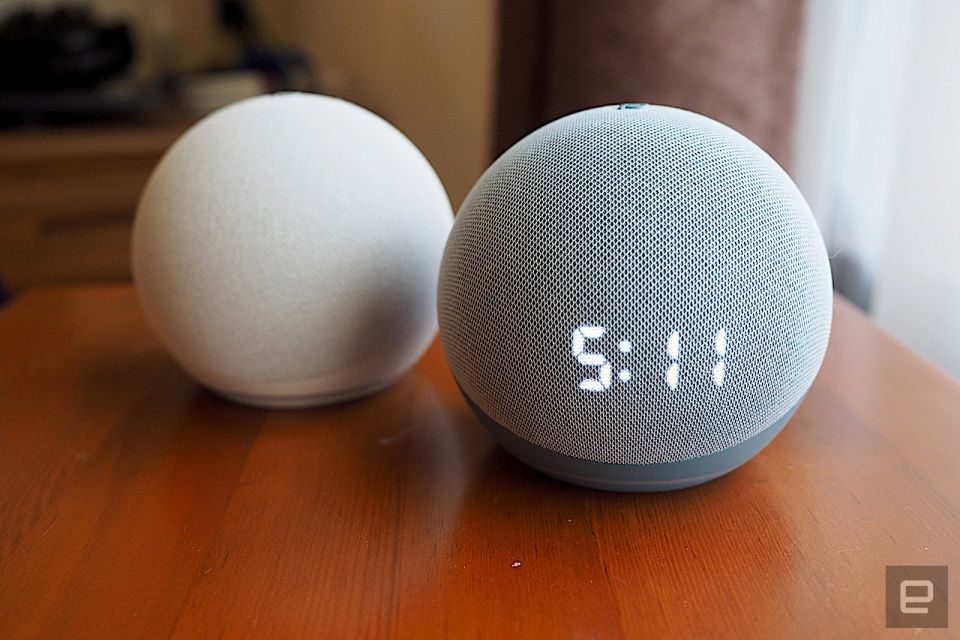 The latest Echo Dot and Echo Dot with Clock remain on sale for $30 and $40, respectively, close to their all-time lows. Now’s a good time to upgrade the smart speakers you may have in your home with new ones or add to your existing setup while saving money. We gave the Echo Dot a 88 for its attractive, rounded design, good audio quality, and handy 3.5mm audio-out jack.

All of Samsung’s latest flagship smartphones are on sale, some of which are up to $200 off. The Galaxy S21 5G is down to $699, the S21+ is on sale for $799, and the S21 Ultra has dropped to $999. It’s an excellent opportunity for those that have been meaning to upgrade. We consider the Galaxy S21 the best value Android phone right now, while the Galaxy S21 Ultra is more for power users who will spare no expense for the best.

May the 4th deals started early this year, so now’s a good time to grab a Star Wars-themed Instant Pot if you’ve had your eye on one. Multiple 6-quart versions, including the R2D2 and The Child models, are on sale for $60, which is $40 off their regular price.

Our favorite pair of wireless headphones, the Sony WH-1000XM4, has returned to an all-time low of $278. You can even grab a bundle with the cans, a protective case, and a portable battery pack for only $300. If you’re looking to spend a bit less, Sony’s WH-XB900N Extra Bass headphones are also on sale in a bundle for $178.

If earbuds are more your speed, Sony’s WF-1000XM3 wireless buds are down to $178. We gave them an 89 for their excellent sound quality and ANC, handy companion app, and excellent battery life.

Roku’s Streambar is down to $100 at HSN, which is close to an all-time-low price. We gave the Streambar a score of 86 for its compact design, good audio quality, built-in Roku Ultra streaming tech, and ability to double as a Bluetooth speaker.

Fitbit may have announced its new Luxe tracker the other week, but many of its other devices remain on sale ahead of Mother’s Day. The Fitbit Sense is down to an all-time low of $250, while the Versa 3 is on sale for $180, and the Inspire 2 is down to $70. The first two options are better for those like the smartwatch look, while the Inspire band is best if you want a more minimalist device to track daily activity and sleep.

B&H Photo knocked the price of the Verizon variant of the OnePlus 8 5G smartphone down to $399, which is $400 off its regular price. While the OnePlus 9 handsets just came out, this is an excellent opportunity to get a solid Android phone for much less than usual — but the deal expires tonight. Both smartphones on sale here have a Snapdragon 865 CPU, 8GB of RAM, and 128GB of storage, plus 6.55-inch 90Hz AMOLED touchscreens and a trio of rear cameras.

A four-pack of Amazon’s Eero mesh WiFi system is on sale for $211, or $67 off its regular price. This is the latest version of the Eero system that came out at the end of last year. The dual-band setup will cover more than 5,000 square feet, and each router has two Gigabit Ethernet ports on it, plus one USB-C port, too.

Adorama has a two-pack of Google’s Nest WiFi system for $189 when you use the code EXTRAOFF80 at checkout. We gave the system a score of 84 for its solid performance, unobtrusive design, built-in Google Assistant speaker, and simple installation process.

One of our favorite internal SSDs, Crucial’s MX500 in 1TB, is down to $90, which is only $5 more than its all-time low. This drive has a standard 2.5-inch design, making it suitable for either desktops or laptops. It also has sequential read speeds of up to 560 MB/s, sequential write speeds of up to 510 MB/s, and AES-256 bit hardware encryption.

Satechi’s Mother’s Day sale is going on now, and you can get 15 percent off site-wide when you use the code FOR MOM at checkout. Satechi has several suitable accessories and work-from-home gadgets that your mom might find helpful, including the USB-C magnetic charging dock for the Apple Watch and the compact backlit Bluetooth keyboard.

Pigments are one of the most flexible soft synths out there. And it only got better with the recent update to version three. The upgrade is free for existing customers, but if you haven’t snagged Arturia’s flagship VST yet, now is a great time to celebrate the release of Pigments 3. The company has slashed the price in half to just $99. And it’s throwing in the Spectrum Sound Pack for free, which will retail for $99 after the sale ends on May 13th. Buy Pigments 3 at Arturia – $99 Follow @EngadgetDeals on Twitter for the latest tech deals and buying advice.

The evolution and future of cloud-native security

How do you attach AirTags?

Uber, PayPal and Walgreens set up a...

Mila hands-on: Much smarter (and pricier) than...