This is a rather unique time in the evolution of software testing.  Teams worldwide are facing new challenges associated with working from home. Digital transformation initiatives are placing unprecedented pressure on innovation.  Speed is the new currency for software development and testing. The penalty for software failure is at an all-time high as news of outages and end-user frustration go viral on social media. Open-source point tools are good at steering interfaces but are not a complete solution for test automation.

Meanwhile, testers are being asked to do more while reducing costs.

Now is the time to re-think the software testing life cycle with an eye towards more comprehensive automation. Testing organizations need a platform that enables incremental process improvement, and data curated for the purpose of optimizing software testing must be at the center of this solution. Organizations that leverage multiple open-source or proprietary testing tools must consider an Open Testing Platform to keep pace with Agile and enterprise DevOps initiatives.

What is an Open Testing Platform?
An Open Testing Platform (OTP) is a collaboration hub that assists testers to keep pace with change. It transforms observations into action – enabling organizations to inform testers about critical environment and system changes, act upon observations to zero in on ‘what’ precisely needs to be tested, and automate the acquisition of test data required for effective test coverage.

The most important feature of an Open Testing Platform is that it taps essential information across the application development and delivery ecosystem to effectively test software. Beyond accessing an API, an OTP leverages an organization’s existing infrastructure tools without causing disruption—unlocking valuable data across the infrastructure. An OTP allows any tester (technical or non-technical) to access data, correlate observations and automate action.

In an OTP, the model is also the centerpiece for collaboration. All tasks and data observations either optimize the value of the model or ensure that the tests generated from the model can execute without interruption.  Since an OTP is focused on the software testing life cycle, we can take advantage of known usage patterns and create workflows to accelerate testing. For example, with a stable model at the core of the testing activity:

Data curated for testing software
Automation must be driven by data. An infrastructure that can access real-time observations as well as reference a historical baseline is required to understand the impact of change. Accessing data within the software testing life cycle does not have to be intrusive or depend on a complex array of proprietary agents deployed across an environment. In an overwhelming majority of use cases, accessing data via an API provides enough depth and detail to achieve significant productivity gains.  Furthermore, accessing data via an API from the current monitoring or management infrastructure systems eliminates the need for additional scripts or code that require maintenance and interfere with overall system performance.

Many of the data points required to optimize the process of testing exist, but they are scattered across an array of monitoring and infrastructure management tools such as Application Performance Monitoring (APM), Version Control, Agile Requirements Management, Test Management, Web Analytics, Defect Management, API Management, etc.

Why is an Open Testing Platform required today?
Despite industry leaders trying to posture software testing as value-added, the fact is that an overwhelming majority of organizations identify testing as a cost center. The software testing life cycle is a rich target for automation since any costs eliminated from testing can be leveraged for more innovative initiatives.

But why have automation rates remained so low for software testing when initiatives like DevOps have focused on accelerating the release cycle? There are four core issues that have impacted automation rates:

Outsourcing depleted internal testing skills
The general concept here is that senior managers traded domestic, internal expertise in business and testing processes for offshore labor, reducing Opex . With this practice known as labor arbitrage, an organization could reduce headcount and shift the responsibility for software testing to an army of outsourced resources trained on the task of software testing. This shift to outsourcing had three main detrimental impacts to software testing: the model promoted manual task execution, the adoption of automation was sidelined and there was a business process “brain-drain” or knowledge drain.

Testers had limited access to critical information
Perhaps the greatest challenge facing individuals responsible for software testing is staying informed about change. This can be requirements-driven changes of dependent application or services, changes in usage patterns, or late changes in the release plan which impact the testers’ ability to react within the required timelines.

Interestingly, most of the data required for testers to do their job is available in the monitoring and infrastructure management tools across production and pre-production. However, this information just isn’t aggregated and optimized for the purpose of software testing. Access to APIs and advancements in the ability to manage and analyze big data changes this dynamic in favor of testers.

Although each organization is structurally and culturally unique, the one commonality found among Agile teams is that the practice of testing software has become siloed. The silo is usually constrained to the team or constrained to a single application that might be built by multiple teams. These constraints create barriers since tests must execute across componentized and distributed system architectures.

Ubiquitous access to best-of-breed open-source and proprietary tools also contributed to these silos. Point tools became very good at driving automated tests. However, test logic became trapped as scripts across an array of tools. Giving self-governing teams the freedom to adopt a broad array of tools comes at a cost:  a significant degree of redundancy, limited understanding of coverage across silos, and a high amount of test maintenance.

The good news is that point tools (both open-source and proprietary) have become reliable to drive automation. However, what’s missing today is an Open Testing Platform that assists to drive productivity across teams and their independent testing tools.

As a result, individuals who are responsible for testing need awareness of broader environment data points located throughout the pre-production environment. Without automating the sub-tasks across the software testing life cycle, test automation will continue to have anemic results.

An Open Testing Platform levels the playing field
Despite the hampered evolution of test automation, testers and software development engineers in test (SDETs) are being asked to do more than ever before. As systems become more distributed and complex, the challenges associated with testing compounds. Yet the same individuals are under pressure to support new applications and new technologies – all while facing a distinct increase in the frequency of application changes and releases. Something has got to change.

An Open Testing Platform gives software testers the information and workflow automation tools to make open-source and proprietary testing point tools more productive in light of constant change.  An OTP provides a layer of abstraction on top of the teams’ point testing tools, optimizing the sub-tasks that are required to generate effective test scripts or no-code tests. This approach gives organizations an amazing degree of flexibility while significantly lowering the cost to construct and maintain tests.

An Open Testing Platform is a critical enabler to both the speed and effectiveness of testing.  The OTP follows a prescriptive pattern to assist an organization to continuously improve the software testing life cycle.  This pattern is ‘inform, act and automate.’ An OTP offers immediate value to an organization by giving teams the missing infrastructure to effectively manage change.

The value of an Open Platform 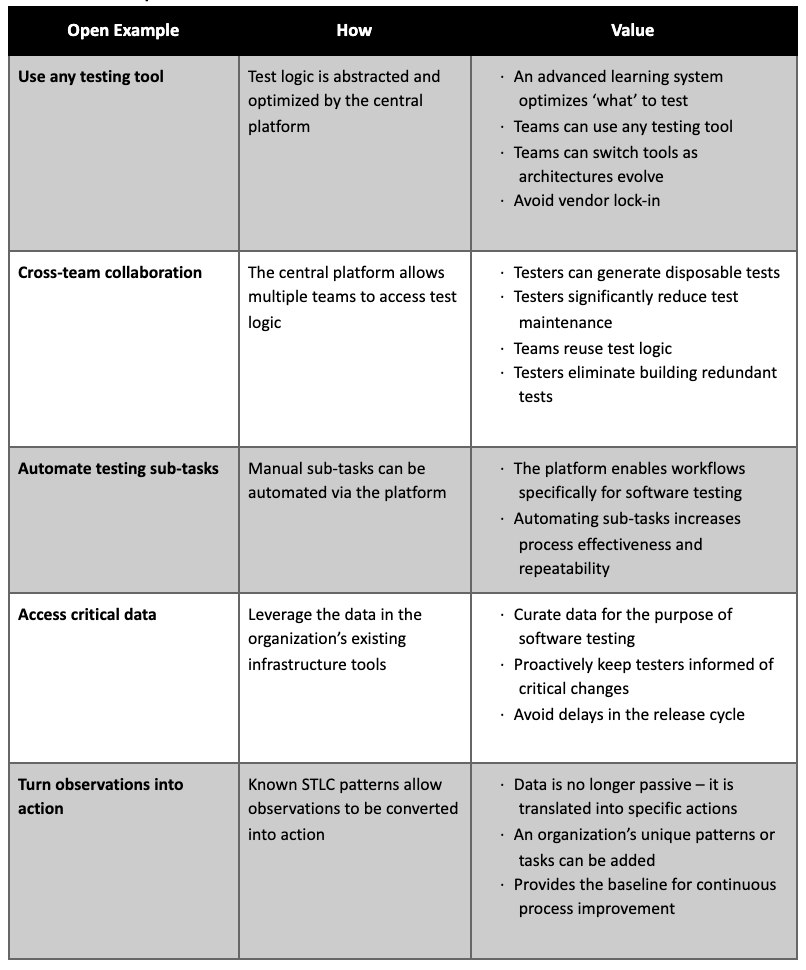 Inform the team as change happens
What delays software testing? Change, specifically late changes that were not promptly communicated to the team responsible for testing. One of the big differentiators for an Open Testing Platform is the ability to observe and correlate a diverse set of data points and inform the team of critical changes as change happens. An OTP automatically analyzes data to alert the team of specific changes that impact the current release cycle.

Identifying and communicating change is critically important, but an Open Testing Platform has the most impact when testers are triggered to act. In some cases, observed changes can automatically update the test suite, test execution priority or surrounding sub-tasks associated with software testing. Common optimizations such as risk-based prioritization or change-based prioritization of test execution can be automatically triggered by the CI/CD pipeline.  Other triggers to act are presented within the model-based interface as recommendations based on known software testing software algorithms.

Software testing tools have evolved to deliver dependable “raw automation.” Meaning that the ability to steer an application automatically is sustainable with either open-source or commercial tools.  If you look across published industry research, you will find that software testing organizations report test automation rates to be (on average) 30%.  These same organizations also report that automated test execution is (on average) 16%.  This gap between the creation of an automated test and the ability to execute it automatically lies in the many manual tasks required to run the test. Software testing will always be a delay in the release process if organizations cannot close this gap.

Automation is not as easy as applying automated techniques for each of the software testing life cycle sub-processes.  There are really three core challenges that need to be addressed: