Take a data-first approach to modernization

Modernization is essential for companies to keep up with evolving industry conditions. Still, some businesses may be modernizing at a faster pace than their software can keep up with.

In an SD Times Live! talk with CoreLogic, Eric Minick, DevOps evangelist at CoreLogic, and Brandon Tylke, chief software architect at CoreLogic, explained why it’s essential to take a data-first approach to any modernization efforts. 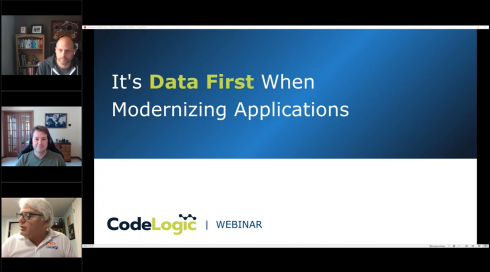 “Where the complexity seems to accumulate, time after time that’s caused by a mismatch between what the business logic is trying to achieve and how the data is architected,” said Minick.    Minick recommends documenting any information you know you will need in the future as these systems are being architected and built. That way, complexity can be managed, and when you need to find something down the road, you can easily access it. “Pull it together as it’s in-flight so that if you need to say ‘where is everything?’ you’ve got it all in one place,” he said.

This documentation can also be helpful in modernization scenarios that involve breaking up applications into smaller pieces.  To explain why a data-first approach is beneficial, Minick and Tylke gave an example of a typical pattern they see from customers. When moving to microservices architectures, the path is often to pull services from a monolith one by one, connect back to that monolith at the API layer, and eventually refactor the database. But according to Tylke, often companies will stop before getting to that third step.

Companies who take these steps in reverse might fare better, according to Tylke, because they’re looking at the data first, which lends itself to being able to better think about how the application can logically be broken up.  To learn more about this topic and common patterns CoreLogic sees during modernization efforts, watch the tech talk “It’s Data First When Modernizing Applications” on-demand now.