The Quintessence palette is inspired by space, a theme I’ve always found to be a rich source of color inspiration. It features a mix of cool and warm-toned shades but leans slightly cooler-toned overall. The palette includes four matte eyeshadows and eight shimmer eyeshadows.

Initially, my color story for Quintessence included 10 shades (three mattes and seven shimmers). It’s was bold, vivid, and would be a more complex palette to use cohesively, which is part of why all the palettes were adjusted to 12 shades to introduce more cohesive (rather than deliberately design them as complementary palettes). 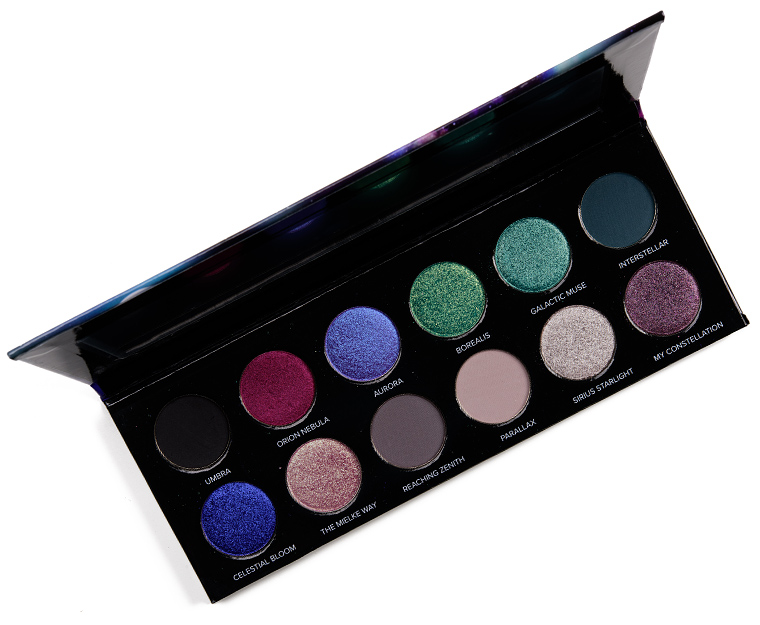 I knew from the beginning that I’d be pushing the possibilities as I had berry-red and violet purple mattes that likely would require adjustments over time to use them with FDA-approved color additives only.

When I described the colors I wanted for each palette, I provided a written description along with links to swatches of similar shades that were closer (either in color or in the “vibe”) and referenced Sydney Grace’s existing line if there was anything nearby (like “A deeper, darker version of A with a cooler undertone and more of a metallic shine with less sparkle”), which I figured would give them a good reference point to start from visually. Only one shade, The Mielke Way, was explicitly modeled after an existing shade (The Greatest Gift), and it was as “I want this but MORE intense, MORE shimmery!”

Note: Palettes are being sent to official swatches this week, but as I was first to receive palettes (duh), I figured I’d recruit my husband’s and my sister’s arms for swatching, so I have those ready now. We will have very light, light/light-medium, medium, medium-dark, and dark skin tones represented before launch.

FURTHER READING:
Formula Overview
for details on general performance and characteristics (like the scent).

Global glitch: Swaths of internet go down after cloud outage

What cheek product was worth the splurge?