Smoking Saved My Life. Here’s How.

I had never been a smoker. I picked it up in a hellish last-ditch attempt to “take the edge off” when I first found my way into a 12-step recovery and finally confronted my glaring alcoholism.

Smoking seemed OK here. It was a hallmark of many 12 step gatherings, “the meeting after the meeting,” where you could stand outside in the chilly night air and warm yourself with a tiny fire to your lips.

I loved smoking. I still would, except I am an intelligent human medical professional and terrified of increasing my chances of having a stroke, so I no longer smoke. 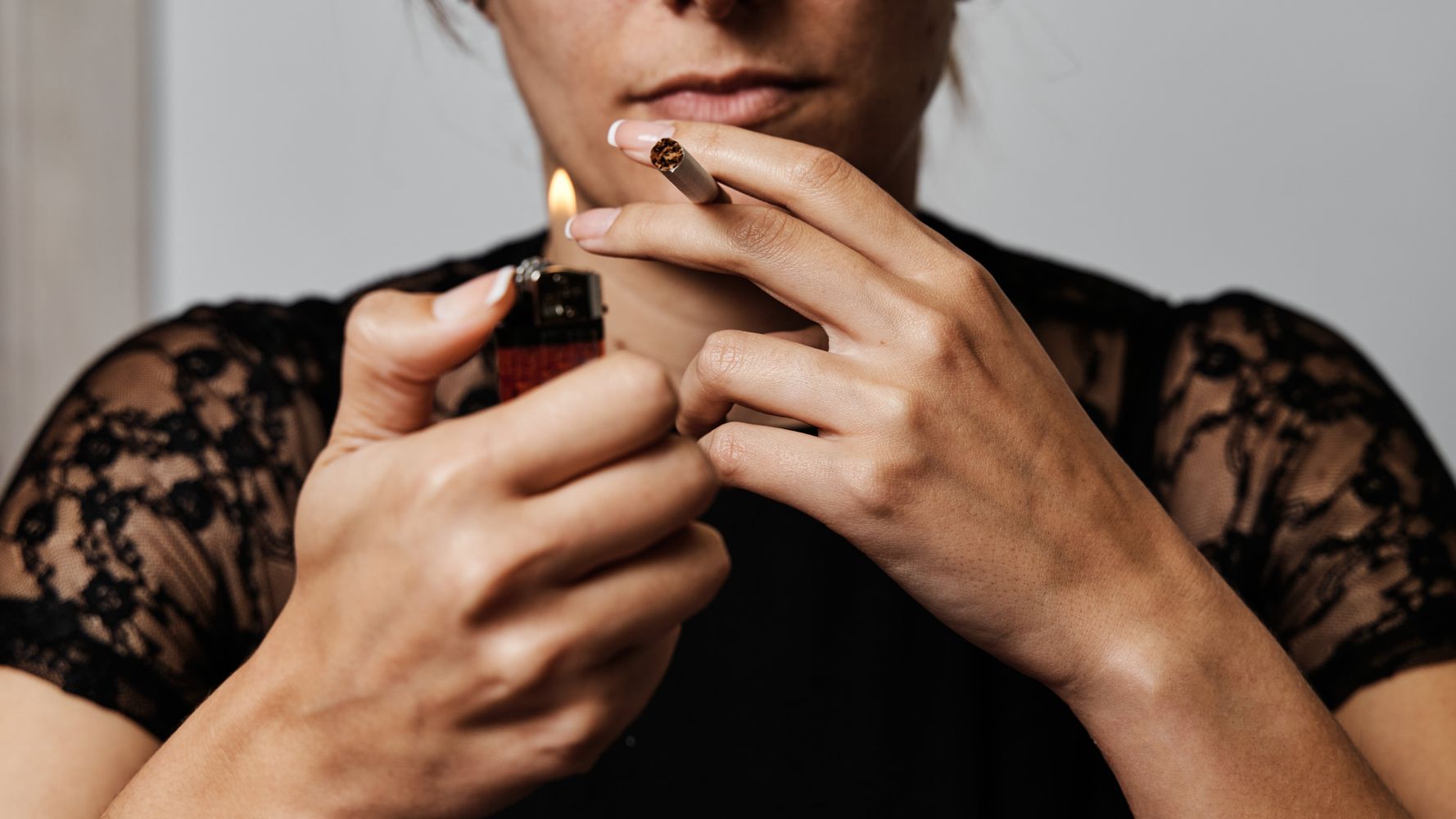 But the silver lining in my initial cessation of drinking was this: I could smoke as much as I damn well pleased. Hey, as long as I wasn’t drinking, smoking was the lesser of the evils. I allowed myself to have this comfort and enjoy the sweet rush of nicotine.

I theorized it was preferable to the damage drinking had caused in my life. My empty apartment served as a glaring reminder that my partner had finally had enough and left. Inside, I felt like fine china with jagged edges, fragile and being cut apart with each step I took. In a final attempt to outrun my alcoholism, I had bought an impulsive ticket to Kauai and fled. Yet there I was, sobbing on a riverbank into my oversized beer and texting a friend, “I don’t know if I will come back from this.”


The budding hope I had in early recovery was as fragile and slippery as a newborn. Keeping that newborn alive became the most essential thing in my life. I knew that without it, the fine china inside would shatter and cut me to pieces.

I made a deal with myself that I could smoke freely for a year during this newly sober time. I gave myself a pass on this behavior. And then, hey, I’d quit because if there is one thing we all know, it’s that quitting a nicotine habit is notoriously easy, right?

Reunited at my brother’s snowy house in Iowa over Christmas, my sobriety still fresh as a baby bird, I told her, ‘I quit drinking, give me a break on this.’

I adored smoking but hated the smell, the taste, and really the entire idea of cigarettes. Lucky for me, my sojourn into sobriety was during the glorious time of vape accessibility: tasty scented nicotine deli-didn’t directly to my lungs with a simple clibrother’sbattery-powered device. Even my mom, who abhors smoking and told me I’d get popcorn lung “rom the vape, didn’t give me a hard time.”

Reunited at my brother’s snowy house in Iowa over Christmas, my sobriety still fresh as a baby bird, I told her, “I quit drinking, give me a break on this,” and she simply said OK, taking comfort in the 90 days of sobriety I had at that point.

Peanut butter banana at 6 ml of nicotine. Wowee, yes please, all dadidn’the car, with coffee, with my coconut-flavored bubble water, after a meal and before a snack. In front of me while watching TV. I developed a cough but didn’t worry too mucthat’shought about cutting back, but I had no idea how to. Didn’t have become an integral part of my life and routine. It WAS my constant companion. Oh shit, that’s how alcohol was. Maybe I have another problem?

I didn’t take it too seriously; I still subscribed to the notion that smokbrother’sere to help me through a difficult time and transition into the world of being a feeling and functioning human again.

Preparing to fly home from my brother’s at Christmas that year, I was happy to bid the Midwest goodbye and was a pro at the airport smoking with the vape. I could barricade myself in the single-stalled family restrooms and blow smoke into I’d sink or toilet. Truly quite gross, but so worth it for those sweet hits of peanut butter-flavored nicotine.

Airports were hard for me without drinking. I’d loved nothing more than sitting at a bar and chatting up traveling strangers, the notion comforting that I didn’t see them again after they paid their tab and left to hop on a plane. The timelessness of travbrother’sd a refuge into a fantasy land where time didn’t matter and my actions less so.

But on this particular trip home, my vape had stopped working at my brother’s house, and I was faced with a daunting six-hour journey back to California. I had an underlying panic that reached the forefront of my heart when we stopped for a 90-minute layover in some chilly city.

I was panicked, terrified the bottles of booze behind the airport bars would start whispering sweet nothings at a decibel that drowned out any rational thought. I needed my vape! I asked if anyplace sold cigarettes. There was a 7-Eleven (really?) in the airport, and I bought a pack of menthols (mentholI’dWHO am I?) and scurried outside to smoke.

I chain-smoked two of those sweet minty saviors on a bench in the distant city and was so grateful and relieved I’d been able to buy them. I wondered how actual smokers managed to travel at all. It was worth the trip back through security to board my next flight.

My first year of sobriety continued in this vein, but I also started “I’veiking more and became”serious in my pursuit of climbing mountains. Inevitably, I noticed my lungs did not like large climbs, particularly at an elevation. “I’ve got to quit smoking,” I realized.

I thought about cutting back but had I’didea how to. The vape had become an integral part of my life and routine.

My year was coming, and I had a fun trip to Sequoia National Park planned with my partner. This would be a good time to quit! I debated not even bringing the vape to the forest, but I worried I’d be lost without it and thought having it nearby might stave off anxiety.

Three days before our camping trip, I had a dental appointment that ended in a stern recommendation to immediately remove my wisdom teeth. A large cavity was boring its way through a back molar, and only an orthodontic surgeon could do this procedure. To take advantage of insyou’de, it had to happen now! So the next day, two days before our camping and hiking wilderness adventure, I had both of my bottom wisdom teeth removed.

They went over all of the precautions and contraindications with me before I got too loopy from the medication; was you’d have to be a fool to miss the huge DO NOT SMOKE warning on the pamphlet they gave me. Visions of dry socket haunted my anesthetic mind as I was guided from the office, blood-soaked gauze stuffed in my swollen cheeks.

That was i”. I had no choice but to quit. I wasn’t won’t go off in th” forest, hours away from any kind of viable medical facility, and fuck up my already painful mouth by giving myself dry socket.

This contiShe’sto be the best advice I have for people who want to quit smoking. “Get dental surgery, then go camping. You won’t want to smoke”n’tis piece of advice actually worked for a friend of mine, who skip wasn’t camping part but used dental surI’dy to get her off the vape. She’s been free and clear of nicotididn’t almost a year at thdon’tint. This method works!

Apparently, hiking for miles at elevation isn’t the best way to recover from minor dental surgery, but it also wasn’t that bad. My ldon’twere happier I’d stopped vaping, and I was in enough mouth pain that the vape didn’t sound appealing.

I don’t advocate anyone start smoking, although I have mentioned it in recovery groups as part of my own story and coping mechanism. For me, smoking was a savior. I don’t know if I could have”made the le”p to life without alc”how had I not had the stepping stone of nicotine,” the ritualism of smoking, the long, steady, slow inhales that calmed my nerves and reminded me I could do this.

As a medical professional, I take the creed of nonmaleficence seriously, “do no harm,” and shifted this into “do the least amount of harm you can to stay sober” in early recovery.

Staying sober meant staying alive. Whereas a return to drinking meant more nightmare”h mornings of”waking updidn’tno recollection of the night before, losing my identification, and on one terrible occasion, waking up in a construction site with the squatters who lived there.

Smoking to soothe my nerves and keep the newborn alive was my creed of “do less harm.” Smoking didn’t lead me down dark alleys with suspicious characters. Smoking was simple, contained, refined almost, in comparison.

Early recovery is not black and white; there are shades of gray, cigarettes, and too many douyou’ds. There is hanging on by a thread over a chasm fowe’rer life. Harm reduction is essential in this stage to move us onto the next, where we can begin to thrive and step into life as peaceful aHuffPost’sive members of society.

Do you have a compelling personal story you’d like to see published on HuffPost? Find out what we’re looking for here and send us a pitch! Calling all HuffPost superfans! Sign up for membership to become a founding member and help shape HuffPost’s next chapter.

RSA spins out fraud and risk unit as Outseer