Report: The best coding bootcamps to attend to land a job at the Big Five

Getting a computer science degree is no longer the only path to a software engineering role. Several of tech’s most sought-after companies to work for don’t require a college degree to land a job and accept coding Bootcamp graduates or candidates who have completed some other forms of instruction. 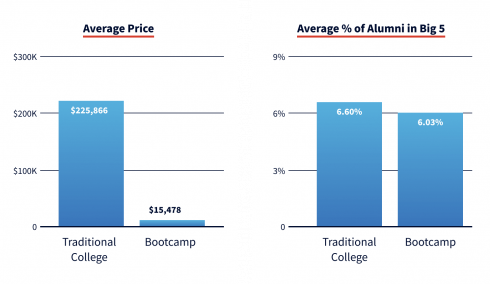 RELATED CONTENT: Bootcamps and MOOCs are picking up STEAM

The number one coding boot camp attended by employees of the Big Five was Code Fellows. Eleven percent of Code Fellows’ graduates are employed at the Big Five. The Bootcamp had about 2,000 alumni listed on LinkedIn. It had a similar percentage of alumni employed at Stanford University and was higher than Cornell University’s 9.44% and University of California-Berkeley’s 8.68%.

According to Switchup, the price tag is one of the biggest draws of coding boot camps over college. The most expensive boot camps cost less than $30,000, while top universities cost more than $250,000.

“Overall, our findings showed coding boot camps offered competitive employment results compared to computer science degrees from top universities, at around 10% of the cost,” Sung Rhee, founder, and CEO of Optimal, the parent company of Switchup, wrote in a post.

The survey found that certain prestigious universities, including Stanford University, Cornell University, and the University of California-Berkeley, had higher employment rates at the Big Five. Still, overall, the average employment rates for computer science graduates and boot camp graduates were similar. The average percentage of alumni from a traditional college employed at a Big Five company was 6.60%, and the rate for Bootcamp alumni was 6.03%.

“While traditional computer science degrees still have a significant foothold in tech education, the industry is rapidly evolving – faster than university curriculums can change, in many cases. These comparable job outcomes show boot camps can be a strong alternative to traditional degree pathways. Given the massive need for short-term education options to get workers retrained after the pandemic, boot camps are well-positioned to play a key role in the economic recovery in the coming years,” Rhee wrote.

iPhone 13 models pop up for certification

Life Insurance and Health Insurance: Why to get insured and which cover is essential?