The Go programming language is making its way to more enterprises and businesses. The 2020 Go survey results found that 76% of respondents are using Go at work, and 66% stated it’s becoming critical to their company’s success.

Additionally, 91% of respondents would like to use Go for their next new project, and 89% find it works well for their team. The results are based on 9,648 developer responses. “Understanding developers’ experiences and challenges helps us measure our progress and directs the future of Go,” the team wrote in a post. 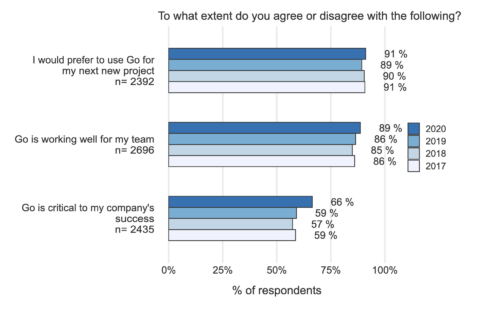 The language’s top features, according to respondents, include build speed, reliability, using concurrency, CPU usage, and editor support. VS Code is the preferred editor with GoLand following closely. Respondents are also having success with its cloud services, debugging, and modules.

The report did find a downwards trend of those who stated they feel welcomed by the Go community. Only 78% of respondents reported feeling held this year compared to 84% in 2017. When asked what would make them feel more welcome, respondents stated more learning resources and docs, improved contributor experience, and maintainer attitudes.

The top use cases for Go include API/RPC services, CLI, libraries or frameworks, and web services.  The top reasons for not using Go involve working on a project in another language. The team prefers to use another language, and Go lacks a critical feature necessary to do their work. Top challenges include lack of generics, modules/package management, and problems with the learning curve.

Alan Watts on the Meaning of Freedom, the Only Real Antidote to Fear, and the Deepest Wellspring of Love – Brain Pickings