Recreation at risk as Lake Powell dips to historic low

PAGE, Ariz. — A thick, white band of newly exposed rock face stretches high above boaters’ heads at Lake Powell, creating a sharp contrast against the famous red desert terrain as their vessels weave through tight canyons that were once underwater.

It’s a stark reminder of how far the water level has fallen at the massive reservoir on the Utah-Arizona border. Just last year, it was more than 50 feet (15 meters) higher. Now, the level at the popular destination for houseboat vacations is at a historic low amid a climate change-fueled megadrought engulfing the U.S. West. 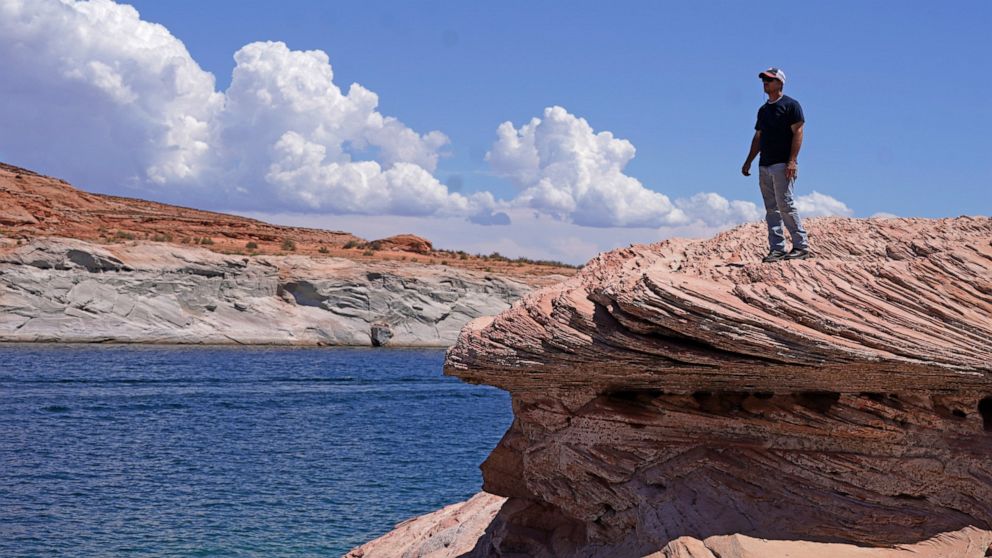 At Lake Powell, tents are tucked along shorelines that haven’t seen water for years. Bright-colored jet skis fly across the water, passing kayakers, water skiers, and fishermen under a blistering desert sun. Closed boat ramps have forced some houseboats off the lake, leaving tourists and businesses scrambling. One ramp is so far above the water, people have to carry kayaks and stand-up paddleboards down a steep cliff face to reach the surface.

Houseboat-rental companies have had to cancel their bookings through August — one of their most popular months — after the National Park Service, which manages the lake, barred people from launching the vessels in mid-July.

At the popular main launch point on Wahweap Bay, the bottom of the concrete ramp has been extended with steel pipes so boats can still get on the lake, but that solution will only last another week or two, the park service said.

Lake Powell is the second-largest reservoir in the United States, right behind Nevada’s Lake Mead, which stores water from the Colorado River. Both are shrinking faster than expected, a dire concern for a seven-state region that relies on the river to supply water to 40 million people and a $5 billion-a-year agricultural industry.

They are among several large bodies of water in the U.S. West that have hit record lows this summer, including the Great Salt Lake in Utah. Lake Oroville in California is expected to reach a historic low by late August, with the states more than 1,500 reservoirs 50% lower than they should be this time of year.

Government officials had to begin releasing water from sources upstream last month to keep the lake’s level from dropping so low it would have threatened hydropower supplied by the dam.

It comes as less snowpack flows into the Colorado River and its tributaries, and hot temperatures parch soil and cause more river water to evaporate as it streams through the drought-plagued American West. Studies have linked the regions more than 20-year megadrought to human-caused climate change.

Fluctuating water levels has long been a staple of Lake Powell, but National Park Service officials say the usual forecasts couldn’t predict just how bad 2021 would be. Finger-pointing has started as boaters, local officials, and the park service debate what to do now.

The 53-year-old bought a retirement home in nearby Page, Arizona, after completing 25 years of military service in February. He wanted to return to Wahweap Bay, where he spent most of his childhood and teen years fishing, waterskiing, and working odd jobs around the lake. But after watching how the lake has been managed, Schneider says he’s starting to regret it.

Officials say they have solutions for families and boaters who sometimes plan years ahead to explore the glassy waters that extend into narrow red rock canyons and the tourism industry that depends on them.

Once the severity of the drought became clear, federal officials began looking for options to allow boat access at low water levels, said William Shott, superintendent of the Glen Canyon National Recreation Area, where Lake Powell is located. The park service discovered an old ramp on Wahweap Bay that will be built out to support houseboats and smaller motorboats.

Shott says he hopes the $3 million ramps can be completed by Labor Day weekend. The project is funded by the park service and lake concessionaire Aramark. The agency and officials from the town of Page, which relies on lake tourism, plan to open another old asphalt ramp to provide access for smaller boats while the larger one is updated.

Tom Materna, who has been visiting Lake Powell for 20 years, launched his family’s 65-foot (20-meter) timeshare houseboat just hours before the main ramp closed but had to cut their vacation short as water levels dropped in mid-July.

“They said no more launching out of the Wahweap ramp, so we were glad we made it out,” the Los Angeles resident said. “Then the next day, I think, or two days later, they called us up and told us that all launch and retrieve houseboats had to be off the lake.”

Page Mayor Bill Diak said losing boat access to the lake could have devastating financial consequences for the city of 7,500. He said local leaders were “slow” to address dropping water levels and limited boat access but that he’s been working closely with park officials and concessionaires on solutions.

“We could have been a little bit more proactive on planning … but we’re moving in the right direction now working together,” Diak said.

He stressed that the impact of climate change needs to be addressed, noting that the U.S. West could be facing far more pressing issues than lake access if the drought continues for another 20 years.

One silver lining, Shott says, is the park service can build boat ramps that are usable even during record drought years. Over $8 million in other low-water projects also are underway.

“Even if we did have a crystal ball and we saw that these lake levels were going to get this low, we couldn’t have prevented it anyway,” Shott said. “With that said, we’re taking advantage of the low water now.”

Troy Sherman, co-owner of a business renting environmentally friendly anchors to houseboats, said the marina housing Beach Bags Anchors shut down shortly after his company launched in spring 2020 because of the coronavirus pandemic. It relaunched this year but had to cancel 95% of its bookings in July when ramps closed to houseboats.

“Until there’s really access to a ramp again to put houseboats in, my business is kind of in a holding pattern,” Sherman said. “But we’ll totally persevere; it’s what you have to do.

Eppolito is a corps member for the Associated Press/Report for America Statehouse News Initiative. Report for America is a nonprofit national service program that places journalists in local newsrooms to report on undercovered issues.