If you’re not familiar with microcontrollers, those devices let you control other parts or other devices. You might think that you can already do this kind of stuff with a regular Raspberry Pi. But microcontrollers are specifically designed to interact with other things. 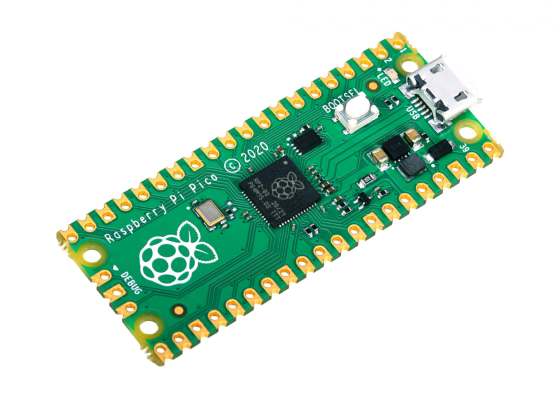 They’re cheap, they’re small, and they draw very little power. You can start developing your project with a breadboard to avoid soldering. You can pair it with a small battery, and it can run for weeks or even months. Unlike computers, microcontrollers don’t run traditional operating systems. Your code runs directly on the chip.

Like other microcontrollers, the Raspberry Pi Pico has dozens of input and output pins on the sides of the device. Those pins are essential as they act as the interface with other components. For instance, you can make your microcontroller interact with an LED light, get data from various sensors, show some information on a display, etc.

The Raspberry Pi Pico uses the RP2040 chip. It has a dual-core Arm processor (running at 133MHz), 264KB of RAM, 26 GPIO pins including 3 analog inputs, a micro-USB port, and a temperature sensor. It doesn’t come with Wi-Fi or Bluetooth. And it costs $4.

In addition to C, you can use MicroPython as your development language. It’s a Python-inspired language for microcontrollers. The Raspberry Pi Foundation has written a ton of documentation and a datasheet for the Pico.

Interestingly, the Raspberry Pi Foundation wants to let others benefit from its own chip design. It has reached out to Adafruit, Arduino, Pimoroni, and Sparkfun to build their own boards using the RP2040 chip. There will be an entire ecosystem of RP2040-powered devices.

This is an exciting move for the Raspberry Pi Foundation, as it can go down this path and iterate on its own chip design with more powerful variants. It provides two main advantages — the ability to control precisely what to put on board and price.