Rainy season unleashes with fury, beauty in US Southwest

Monsoon storms have brought spectacular lightning shows, bounties of wildflowers and mushrooms, and record rainfall to the region’s deserts. They’ve also brought destruction, flooding streets and homes, and leading to some swift-water rescues and several deaths.

It’s a remarkable reversal from 2019 and 2020 when the annual period known simply as “the monsoon” left the region parched. The seasonal weather pattern that runs from mid-June through September brings high hopes for rain, but the moisture isn’t guaranteed. 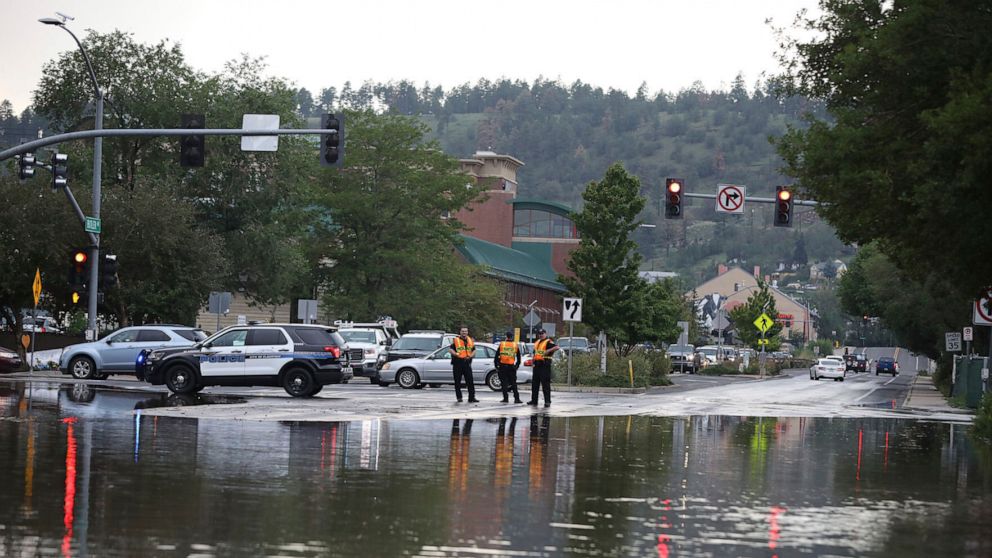 “That traumatized a lot of us here in the Southwest, really worried if the monsoon was broken,” said Mike Crimmins, a climatologist at the University of Arizona. “And then here 2021 monsoon comes along, and it’s almost like we’re trying to make up for the last two seasons.”

Tucson, in southern Arizona, marked its wettest July on record and its 16th most soaked in August. The Phoenix airport is above average for the season by about an inch (2.5 centimeters) but is far from hitting the monsoon record for rainfall, the National Weather Service said. Some higher-elevation cities in metropolitan Phoenix fared better.

Payson has logged nearly a foot (30 centimeters) of rain so far — about 5 inches (12 centimeters) above average. According to the weather service, an area south of Flagstaff had hail that measured 2.5 inches (6.4 centimeters) in diameter.

“That’s usually something you see in the news across the Midwest in tornado season,” said meteorologist Cindy Kobolb in Flagstaff. ““Forecasters that have been here for decades can’t even say the last time they’ve seen hailstones that big in the state.”

Some locations like Window Rock on the Navajo Nation, and Albuquerque, New Mexico, were just behind average precipitation for the season and others well behind because of the hit-and-miss nature of the monsoon.

The remnants of Tropical Storm Nora pushed moisture into the region this week. With each storm, officials warn of potential flooding dangers. Since the monsoon started this year, at least 10 people have died in Arizona and at least four in New Mexico in flooding events.

Despite the abundant rainfall, the region is still trending toward hotter, drier weather because of climate change. , all of Arizona is in some level of drought, and most of New Mexico.

“I’m really trying to enjoy it for what it is right now because I don’t think we’ll see this every summer,” Crimmins said.

The monsoon is characterized by a shift in wind patterns that pull moisture in from the tropical coast of Mexico. Many cities in Arizona and New Mexico get much of their annual rainfall during the monsoon. Crimmins said the water extends into southern Utah, Colorado, and California in a strong season.

The downpours can replenish shallow aquifers and boost reservoirs temporarily. But the rain isn’t a fix for drought-stricken lakes and rivers, like the Colorado River, anywhere in the U.S. West. Those systems rely primarily on melting snow and have been dwindling for more than two decades because of a megadrought.

This winter, the expected La Nina weather pattern means snowpack in the West could be in short supply, forecasters say. That worries fire managers who have been battling more severe blazes increasingly, like those in California.

“The net effect of a robust monsoon is that it helps in the short-term but can set the Southwest up for an active and prolonged fire season for the following year or two,” said Punky Moore, a spokeswoman for the U.S. Forest Service’s Southwest Region.

The same vegetation that can fuel wildfires when it dries up also feeds insects said Gene Hall, an entomologist at the University of Arizona. More butterflies, more moths, and more pesky mosquitoes, he said.

Some insects, such as the cockroach-like Palo Verde beetle, come out only during the monsoon to mate. Flying ants and termites gather by the hundreds or thousands to mate after monsoon rain, Hall said. “Water is life in the desert, and we’ve had a lot of water,” he said. “Everything seems to be doing pretty well.”

Christopher May of Scottsdale has found more than 100 varieties of fungi during trips to Arizona’s mountains this summer, including some rare ones. He said they’re easier to find with more rain, sometimes cloaking the forest floor like a coral reef in the sea.

“We have some of the best mushroom hunting in the country right now, maybe even the best,” he said.

Anissa Doten has a love/hate relationship with the monsoon. She grew up in Tucson, watching the skies light up as thunderstorms rolled in and listening to the rain. It was her favorite kind of weather, magical almost, she said.

Her feelings are more complicated now that she lives in the shadow of a mountain that burned in 2019 in Flagstaff. The home she shares with her five children repeatedly has flooded this year, including during one storm that officials characterized as a “500-year” rain event.

Each time alerts go off on their phones, they rush to check weather gauges and scramble to ensure everyone is safe, and someone is home to pump water and rebuild layers of sandbags.”  It’ss totally different anxiety-driven action mode”” she said.