LAUREL, Philippines — Thousands of people were evacuated from villages around a rumbling volcano near the Philippines. Still, officials said they faced another dilemma of ensuring emergency shelters would not turn into epicenters of COVID-19 infections.

The alert was raised to three on a five-level scale after Taal Volcano blasted a dark gray plume into the sky Thursday. The five-minute steam- and the gas-driven explosion was followed by four more negligible emissions, but the volcano was generally calm on Friday, volcanologists said. 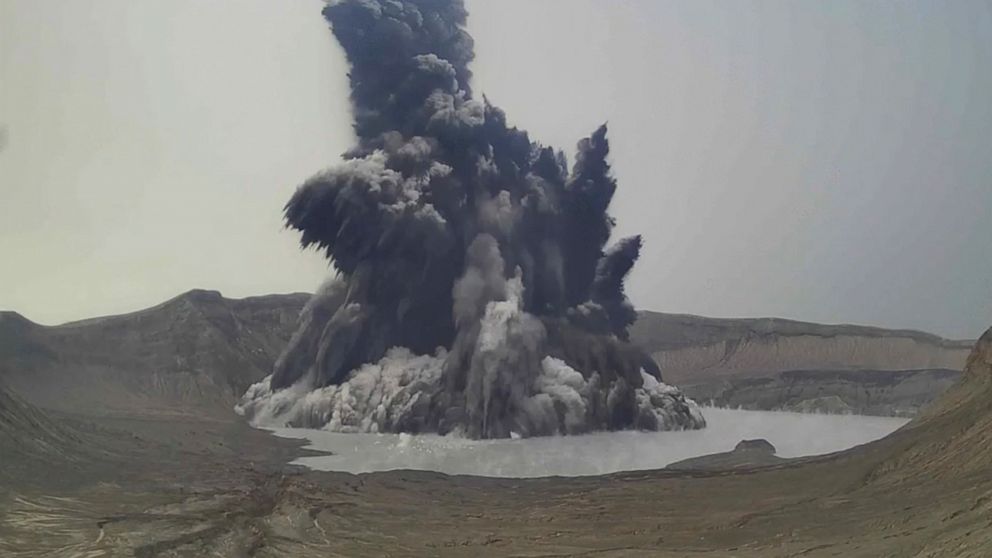 Level three means “magma is near or at the surface, and activity could lead to a hazardous eruption in weeks,” according to the Philippine Institute of Volcanology and Seismology. Level five means a life-threatening eruption is occurring that could endanger communities.

The agency asked people to stay away from a small island in a scenic lake where Taal sits and is considered a permanent danger zone and several nearby lakeside villages in Batangas province south of Manila.

An eruption of Taal last year displaced hundreds of thousands of people and briefly closed Manila’s international airport. However, the volcano agency’s chief, Renato Solidum, said it was too early to know if its current unrest would lead to a full-blown eruption.

The preemptive evacuations that began late Thursday involved residents in five high-risk villages in the lakeside towns of Laurel and Agoncillo.

More than 14,000 people may have to be moved temporarily away from the volcano, said Mark Timbal, a spokesman for the government’s disaster-response agency.

In Laurel town, Imelda Reyes feared for her and her family’s safety in their home near the volcano and in the crowded grade school-turned-evacuation center where they took shelter Friday.

“If we stay home, the volcano can explode anytime,” Reyes told The Associated Press. “But here, just one sick person can infect all of us. Both are dangerous choices.”

Reyes, who washes laundry and has four children, wept in desperation as she said she and her husband, a corn farmer, wanted to leave the evacuation camp for a friend’s house in northern Nueva Ecija province but lamented they did not have money for the bus fare.

Most evacuation camps have set up isolation areas in case anyone began showing COVID-19 symptoms. “It’s doubly difficult now. Before, we just asked people to rush to the evacuation centers and squeeze themselves in as much as possible,” said disaster-response officer Junfrance De Villa of Agoncillo town.

“Now, we have to keep a close eye on the numbers. We’re doing everything to avoid congestion,” De Villa told The Associated Press by telephone. A nearby town safely away from the restive volcano could accommodate up to 12,000 displaced Agoncillo residents in pre-pandemic times but could only shelter half of that now. A laidback city of more than 40,000 people, Agoncillo has reported more than 170 COVID-19 cases, but only about a dozen remain ill. At least 11 residents have died, he said.

The Philippines is a COVID-19 hotspot in Asia, with more than 1.3 million confirmed cases. An alarming surge in infections has started to ease in Manila and outlying regions. But daily patients remain high, and lockdowns have been reimposed in several provinces that have reported case spikes.

President Rodrigo Duterte and his administration have faced criticism over a vaccination campaign saddled with supply problems and public hesitancy. After repeated delays, vaccinations started in March.

Duterte blamed the problems on wealthy Western countries cornering vaccines for their own citizens, leaving poorer countries like the Philippines behind.

The 1,020-foot (311-meter) Taal, one of the world’s most miniature volcanoes, erupted in January last year, displacing hundreds of thousands of people and sending clouds of ash to Manila, about 65 kilometers (40 miles) to the north, where the main airport was temporarily shut down.

Heavy ashfall also buried an abandoned fishing community, which thrived for years in the shadow of Taal on an island in Taal Lake. It shut down a famous district of tourist inns, restaurants, spas, and wedding venues.

The Philippines lies along the Pacific “Ring of Fire,” a region prone to earthquakes and volcanic eruptions. A long-dormant volcano, Mount Pinatubo, blew its top north of Manila in 1991 in one of the most significant volcanic eruptions of the 20th century, killing hundreds of people. Associated Press journalist Jim Gomez in Manila contributed to this report.