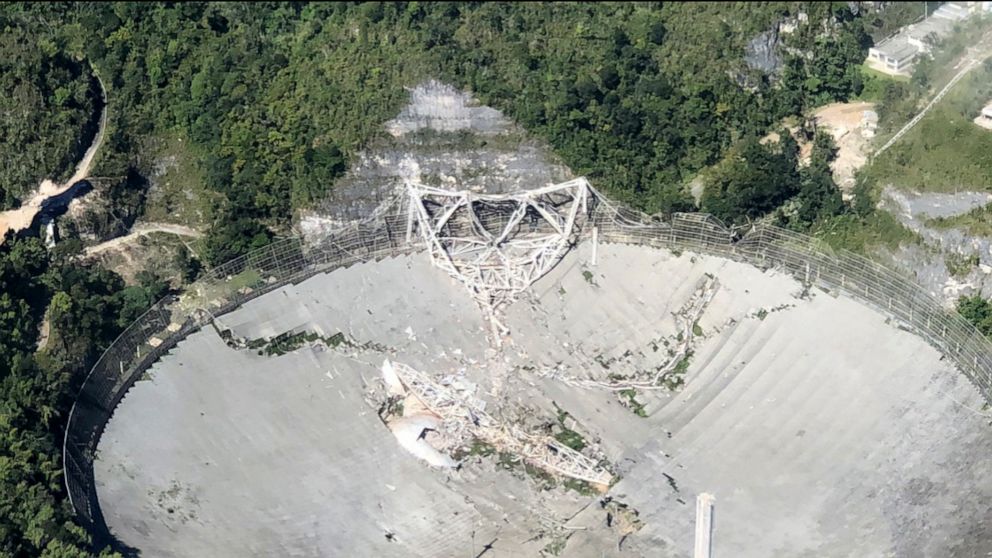 SAN JUAN, Puerto Rico — The National Science Foundation said Friday that it could cost up to $50 million just to clean up the debris at a renowned radio telescope that collapsed last year in Puerto Rico, adding investigations into what caused its cables to fail are still ongoing.

The update is part of a report that the federal agency, which owns the telescope, had to submit to Congress as the investigation continues into the Arecibo telescope. Until recently, the world’s largest radio telescope was used to study pulsars, detect gravitational waves, search for neutral hydrogen, and detect habitable planets, among other things.

The NSF noted that results from the forensic evaluations by engineering firms, including mapping the distribution of debris, won’t be ready until late this year. In addition, the NSF said it asked the National Academies of Sciences, Engineering, and Medicine to launch an independent and expedited study into what caused the telescope to collapse.

“Ensuring safety has continued to be the NSF’s top priority,” the report stated. “This includes not only the safety of personnel on the site but also the safety of the environment in the area and the need to address concerns about historic and cultural preservation.”

Estimated cleanup costs range from $30 million to $50 million, with crews so far sampling soil and excavating areas contaminated by hydraulic oil. The telescope is located in Puerto Rico’s karst region, an important water source, and contains the island’s richest biodiversity. The NSF said officials also plan to analyze soil and water and prevent sediment and pollutants from migrating.

Meanwhile, the University of Central Florida, which manages the telescope, is charged with screening the debris to identify any equipment reused or possibly displayed at the site or at another museum. “All scientific infrastructure that can be utilized is being saved,” the NSF said.

The federal agency said it’s still evaluating whether to repair any damaged technology that could be saved. Some technologies are still in use, including two LIDAR facilities used for upper atmospheric and ionospheric research, such as analyzing cloud cover and precipitation data.

In August, the dish was damaged when an auxiliary cable snapped and caused a 100-foot gash on the plate, breaking about 250 of the dish’s 40,000 aluminum reflector panels and damaging the receiver platform that hung above it.

Then in early November, the leading cable broke, with engineers warning that other cable failure would likely be catastrophic.

A month later, the telescope’s 900-ton receiver platform and the Gregorian dome — a structure as tall as a four-story building that houses secondary reflectors — fell more than 400 feet onto the dish. It was a crushing event for scientists worldwide who had been using the telescope for nearly six decades.