Now That Buffets Are Open, What Are They Doing To Keep Us Safe From COVID-19?

When COVID-19 shut the world down in March 2020, none of us could envision a post-pandemic era, and we didn’t quite know if pre-pandemic features like self-serve buffets would become obsolete. More than a year later, the world is slowly reopening, variants are damned (unfortunately, Nevada is now seeing the highest rate of new COVID-19 cases in the United States). Restaurants allow total capacity. People have shed their masks. Cruises are sailing, albeit with restrictions. And as Patton Oswalt predicted to Conan O’Brien, self-serve buffets have returned to their glory — though they look slightly different. 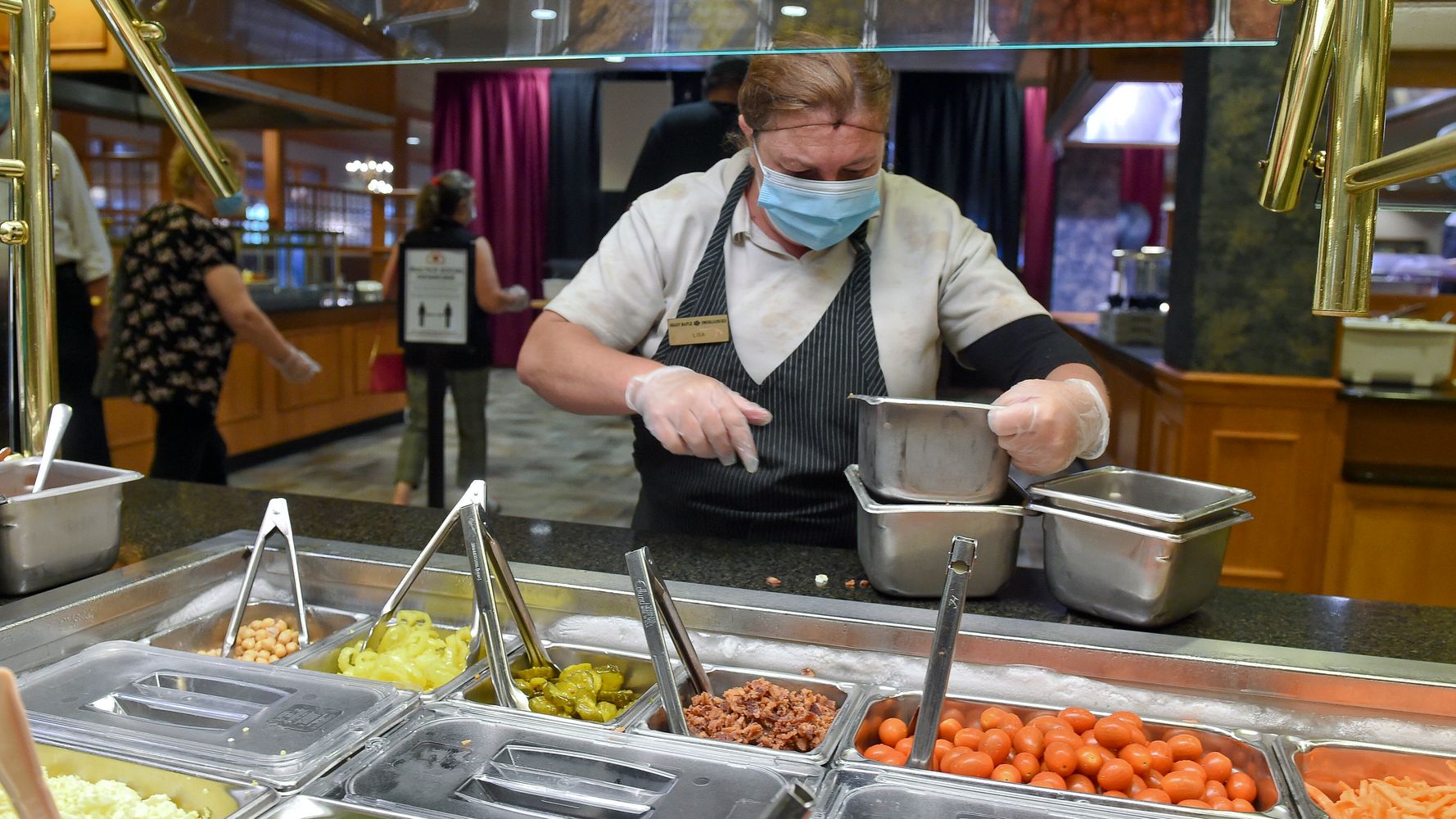 Grand all-you-can-stuff-on-your-plate buffets have always been equated with Las Vegas, and last March, as many as 60 Vegas buffets temporarily closed. A handful reopened the previous summer only to temporarily shutter again. (Station Casinos said it’s permanently closing its buffets.) In June 2020, The Buffet at Wynn became the first casino buffet to reopen on the Strip, but it closed again in September. But on July 1, 2021, it joined seven other casino buffets — Bacchanal Buffet at Caesars Palace, Garden Buffet at South Point Hotel Casino and Spa, Wicked Spoon at Cosmopolitan, Circus Buffet at Circus Circus, MGM Grand Buffet, The Buffet at Bellagio, and The Buffet at Excalibur — is reemerging after a long slumber.

“During the pandemic, we changed our entire model to do everything on individual plates. We had the servers bring the food offerings to the guests … I think [individual plates] looks nicer and plus it gives our guests more options,” he said. But now guests will be able to serve themselves everything from Jonah crab claws to five types of sushi to wedge salads to a made-fresh-to-order taco station, and an add-on of “endless pours” of alcohol.

About 10 miles away from Wynn resides South Point’s Garden Buffet. Of all the casino buffets in Vegas, it’s the only one that has stayed open since reopening in July 2020. In June 2021, it returned to 100% capacity and self-serve. Forging a traditional buffet setup, Garden is already back to pre-pandemic levels. “At this point, short of a little extra Plexiglas, the Garden Buffet looks the same as it did before the pandemic,” Ryan Growney, general manager of South Point, told HuffPost. “We are already back to pre-pandemic levels with regards to covers, and I do not think that is going to change any time soon.”

Last year, Centers for Disease Control and Prevention guidelines halted self-serve, but customers are gleeful it’s back. “The point of a buffet is you get to decide what you want and how much of it you want,” Growney said. “You lose some of that when it is a staff-served buffet. There were a few people that would have liked the servers in place, but the majority of our customers are delighted it is back to normal.”

Frisch’s, a burger chain with 103 locations (down from 110) in Indiana, Kentucky, and Ohio, reopened its weekend breakfast bar last summer with attendants dishing out staples like biscuits and gravy and eggs. This winter, those states lifted self-serve restrictions, and Frisch’s all-you-can-eat bar — infused with new items — rebounded.

“We saw a pretty significant jump in sales in Indiana when we opened the bars back up to be self-serve, and then as Ohio opened up next [in February] and then Kentucky, we saw a very similar trend,” Alison O’Keefe, Frisch’s vice president of marketing, told HuffPost. “It’s interesting that even if the option is there for people to get whatever you want, it really does lose some of that appeal when people can’t do it themselves. There’s probably a difference between taking 50 pieces of bacon versus asking someone to put 50 pieces of bacon on your plate, which I totally get.” One thing that hasn’t yet returned is Frisch’s soup and salad bar, though customers can order a customizable salad.

Safety theater is here to stay.

While we now know the primary way COVID-19 is transmitted is through respiratory droplets, earlier in the pandemic, one reason buffets closed was because the virus can also be transmitted through fomites (objects that carry infection). The virus can feasibly lurk on serving spoons or items that customers touch at a buffet and infect someone whose hand touches their mouth.

As such, last year, the CDC stated: “Avoid offering any self-serve food or drink options, such as buffets, salad bars, and drink stations. This limits the use of shared serving utensils, handles, buttons or touchscreens and helps customers to stay seated and at least six feet apart from people who do not live in their household.” The Food and Drug Administration echoed the CDC’s recommendation in discontinuing self-service buffets. However, it also wrote: “There is no current evidence to support the transmission of COVID-19 associated with food or food packaging.”

To combat this, cleanliness has ramped up at most buffets. Wynn employees, for example, now wipe down the buffet area every half-hour, and employees change serving-line utensils every 10-15 minutes.

“If there so happens to be a guest who happened to use one spoon for this dish, but they used it for a different dish, we actually change out the two dishes and replace them completely,” Duarte said. “For me, I think health and sanitation is an absolute paramount, and I think these practices should just stay in place so we can always serve the hottest, freshest and safest food possible for our guests. If we continue with these sanitation practices, it’s only going to make us stronger. We had strict health and sanitation practices before the pandemic, so really, it’s just an added extra half an hour that we have to do our sanitation, but I’m OK with that.”

Frisch’s continues to offer customers sanitizer and gloves. “Regardless whether or not people are in our personal restaurants or anywhere else actually utilizing it, I think it’s still essential to have that available for the people who want it, to make people feel safe with a level of hospital clean that we have in our restaurants,” O’Keefe said. In the Before Times, sanitary conditions at buffets were a cause for concern. But it’s possible buffets are the most sparkling clean they’ve ever been.

Though buffets in Vegas and inside some restaurants seem to be flourishing, one COVID-19 buffet casualty is the stand-alone buffet restaurant. In the past year, Old Town Buffet and HomeTown Buffet closed permanently, Golden Corral terminated locations, Sweet Tomatoes/Souplantation permanently closed all its sites, and Sizzler filed for bankruptcy.

Unlike Golden Corral and the ilk, Frisch’s is a restaurant first, which has helped it survive. “We have a full menu outside of [the breakfast bar],” O’Keefe said. “We already have drive-thrus and curbside carryout. It’s a different business model. Ours was sort of ‘and.’ We have our current menu AND breakfast bar. That’s a big difference.”

Duarte predicts buffets will progress into more good dining-like atmospheres. “I truly believe that having a buffet is synonymous with Las Vegas, and I honestly do not believe they’re going to go away,” he said. “They’re a great way for guests to come in with a large group of people. I do not believe the buffets will ever go away, especially if we keep to our high standards. We will not only survive; I think we’re going to thrive and just continue on. We are fully committed to staying open and fully committed to keeping on reinventing how we cook the food and how we portray the food for our guests.”

“Nothing will ever go back to being exactly the same,” O’Keefe said, “but I do think that over the upcoming months, as people are getting more out and about and vaccinate, that people will go back to [breakfast] bars.”

So far, various iterations of the American buffet have weathered the most uncertain year in recent memory. For buffet lovers, this news should be as joyful as a plate piled high with bacon.

“There will definitely be a lot of buffets that never come back, but our customers love our buffet, and until that changes, our buffet will never die,” Growney said.

Tips for Choosing Sweets for your Kid’s Party

Cleaner ‘Bridge’ Fuels Are Killing Up To...