LAME DEER, Mont. — Wildfires in Montana threatened rural towns and ranchland, and victims of a California blaze returned to their incinerated town even as the region faced another round of dangerous weather.

Firefighters and residents have scrambled to save hundreds of homes as flames advance across the Northern Cheyenne Indian Reservation in southeastern Montana.

An evacuation order was lifted Friday morning for about 600 people in and around the town of Ashland, just east of the reservation, signaling progress on the blaze that had burned out of control since Sunday. 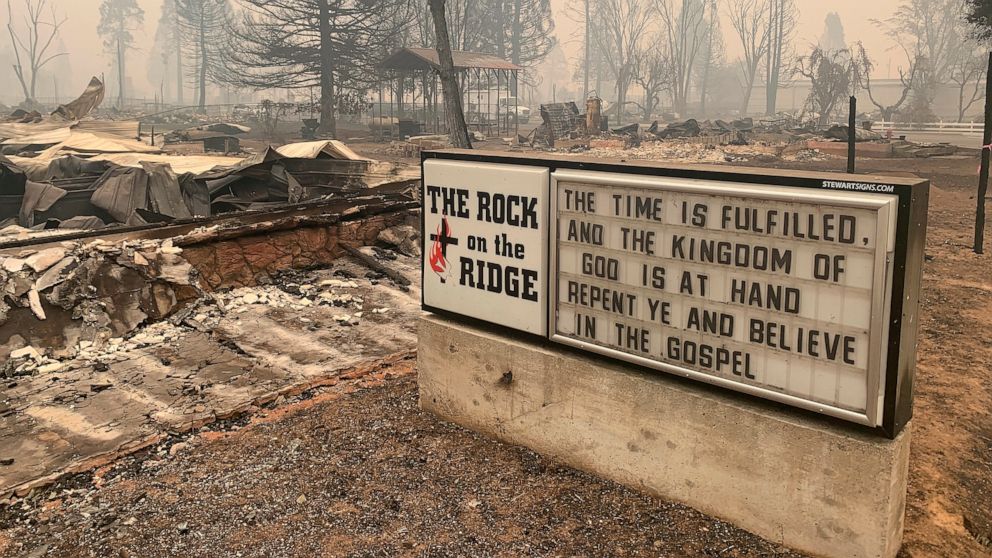 But the fire was still burning near the tribal headquarters town of Lame Deer, where a mandatory evacuation remained in place, and a second fire was threatening from the opposite direction.

The two fires combined have burned 275 square miles (710 square kilometers) this week, so far sparing homes but causing extensive damage to pasture lands that ranchers depend on to feed their cows and horses.

As the blaze raged across rugged hills and narrow ravines, tribal member Darlene Small helped her grandson move about 100 head of cattle to a new pasture, only to relocate them twice more as the flames from the Richard Spring fire bore down. An extreme drought that’s blanketing the West has made matters worse by stunting vegetation untouched by fire.

“They’ve got to have pasture where there’s water. If there’s no water, there’s no good pasture,” Small said. She said it was particularly hard hit were some ranchers already depending on surplus grass after a fire burned them off their average pasture last year.

Fire officials said that gusts and low humidity created hazardous conditions as flames devoured brush, short grass, and timber. The same conditions turned California’s Dixie Fire into a furious blaze that last week burned down much of the small town of Greenville in the northern Sierra Nevada. The fire that began a month ago has destroyed some 550 homes.

Residents were trying to cope with the magnitude of the losses. “Everything that I own is now ashes or twisted metal. That’s just all it is,” said Greenville resident Ken Donnell, who escaped with just the clothes on his back.

Sam Prentice, a firefighter for the USDA Forest Service, battled the flames in Greenville on Aug. 5, when the town was leveled. He was not optimistic about Greenville’s ability to rebuild.

“Essentially, it starts to become an archeology site — kind of a testament to the fire era that we’re in right now,” said Prentice. “It’s daunting.” The fire had ravaged more than 800 square miles (well over 2,000 square kilometers) — an area larger than the city of London — and continued to threaten more than a dozen rural and forest communities.

Despite firefighting progress, it was 31% contained. Fire officials warned that hot weather would continue, and Northern California would see a red flag warning of critical fire weather beginning Friday afternoon. The weather would bring a chance of dry lightning that could spark new blazes even as crews continue trying to surround several other forest fires ignited by lightning last month.

Hot, dry, and weather with strong afternoon winds also propelled several fires in Washington state, and similar weather was expected into the weekend.

Unstable weather was forecast throughout the drought-stricken West, where more than 100 large fires were burning in more than a dozen states.

In Montana, days of swirling winds spread flames in all directions, torching trees and glowing embers that flew across a dry landscape.

The Richard Spring fire was within about 2 miles (3.2 kilometers) of the eastern edge of Lame Deer, while a more minor fire was about 5 miles (8 kilometers) to the West, said fire spokesperson Jeni Garcin.

Of most immediate concern was areas southeast of the town, where homes in a rural area were threatened. Fire engines were posted in that area to provide protection if flames threatened houses, Garcin said.

After a brief break in the weather that brought cooler temperatures Thursday, it’s expected to start heating up again, reaching the 90s by Saturday and staying hot through Monday. Officials say that will dry out grasses and other fuels and make them more susceptible to burning.

According to scientists, climate change has made the Western United States warmer and drier in the past 30 years and will continue to make the weather more extreme and wildfires more destructive. Eugene Garcia, in Greenville, California, contributed to this report.

Boeing’s next Starliner test flight could be delayed for months