There’s something a bit counter-revolutionary about high-end gaming machines made by suit-and-tie PC businesses. The idea of Lenovo, makers of the ThinkPad, building a gaming machine worthy of comment feels a little weird, yet the Legion 5 Pro is just that. The Walmart-exclusive model I’m testing costs $1,530, pairing AMD’s Ryzen 7 5800H with NVIDIA’s GeForce RTX 3070 graphics. Powerful and affordable? That’s almost revolutionary. 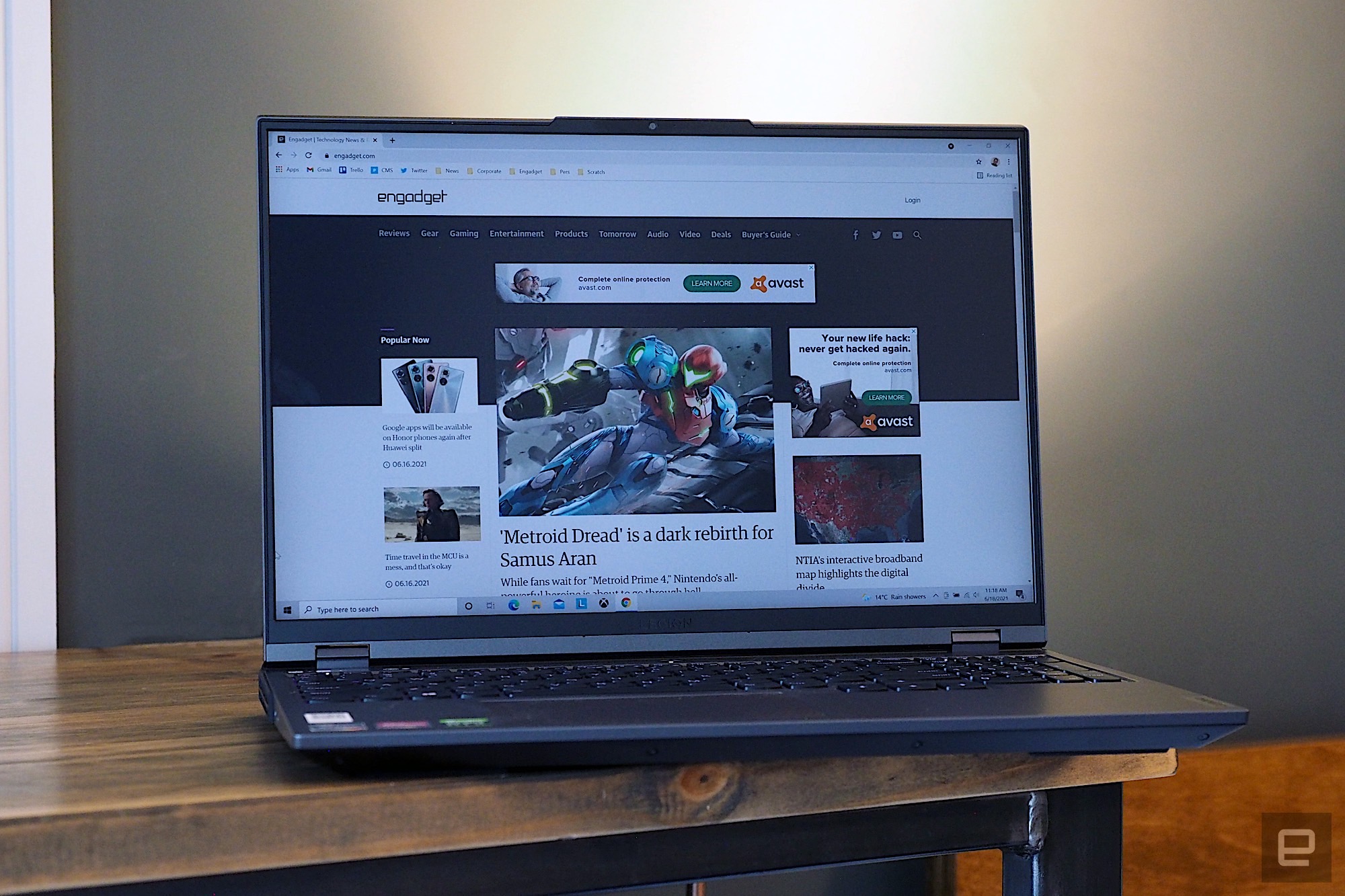 Rounding out that spec list is 16GB RAM and a 512GB SSD. Mercifully, both components are user-upgradeable. That piddly drive will barely hold more than a couple Calls worth of Duty before you’re reaching for an external drive. But these are the sort of intelligent compromises that Lenovo opted for to keep the price down, letting you add more RAM and storage as needed.

And then there’s the screen, a 16-inch, 165Hz QHD, X-Rite Pantone-validated IPS display with the new, taller 16:10 aspect ratio. At 500 nits, the panel can hold its own in bright light compared to many of its rivals, and the matte screen reduces the risk of glare. Watching a 4K video on this thing is an enjoyable experience, and I’ve enjoyed working from this device the past week or so that I’ve been using it. It certainly makes you want to spend hours at a time staring at gigapixel images of, say, Paris, which I definitely didn’t spend a long time doing this week (cough).

Lenovo wasn’t looking to pull up any trees with this design, which is little more than a refinement of what went before. It’s not as thin or light as its rivals and looks better in a dark room lit only by the glow of an RGB keyboard and the odd Nanoleaf panel. But if you’re buying it as a desktop replacement that’ll spend 90 percent of its time plonked on the same desk, it’s okay. Oh, and the aluminum chassis is rock solid, giving you confidence on those occasions when you do need to take it somewhere. That matte gray paint job, while very business forward, hides a multitude of palm sweat-based sins but will attract every speck of dust in a three-mile zone.

The Legion 5 Pro’s chunky chassis also means that you’ll find an excellent supply of I/O running around its deck. You get four USB-A (3.2 Gen 1) ports, two USB-C (3.2 Gen 2), HDMI, Ethernet, and a 3.5mm headphone/microphone jack, as well as the proprietary power jack. You’ll also find a hardware camera mute button on the right-hand side, which replaces the dedicated hardware shutter from previous versions.

Even after several days of use, using Lenovo’s TrueStrike keyboard remains a pleasant but weird experience. The keys have a depth of 1.5mm, but Lenovo uses “soft landing” switches to make each actuation feel a little deeper than that. Every time you hit a key, you’re expecting the hard jerk of a mechanical keyboard, only to find a pillowy end and bounce back up. It’s like filling your shoes with water on a hot day and then stepping into them, it’s beneficial, but your brain is telling you that something’s amiss here.

One thing worthy of comment is that Lenovo took advantage of the Legion 5’s bigger deck size to include a numerical keypad. The company says that the Numpad itself is full size, but it feels a little squashed compared to a regular external PC keyboard to my eyes and fingers. The RGB backlighting is perhaps appropriately muted but can be set to four different lighting zones when required. The trackpad, meanwhile, is perfectly functional, but the bigger size is welcome given how tight previous models have been.

I have less to say about the machine’s 720p camera, which is the very definition of serviceable or valuable in a pinch. Light blooms, everything’s uncomfortably fuzzy, and the overall effect is that of most ‘60s TV shows when they’d get the Vaseline-smeared lens for close-ups. If you’re looking to make a living from streaming, or you’re a professional Zoom-call-haver, buy an external device, please. Poor webcam aside, Lenovo gets props for offering a dedicated camera disconnect button since there wasn’t room in the space-starved lid for its traditional shutter.

Benchmarks don’t tell the whole story, but the Legion 5 Pro comes in close enough to machines priced a couple hundred bucks more. When playing demanding AAA games like Cyberpunk and Shadow of the Tomb Raider, I got between 50-60fps with appropriately tweaked settings. Naturally, you’ll lose a little bit of that when you enable ray tracing, but it can handle hard work relatively well. The Legion 5 Pro has three pre-set performance modes which can be set inside the Vantage utility or cycled through when you hit Fn+Q. One neat addition is that the power button will change color depending on which mode you’re in: Auto offers a white glow, Quiet a cool blue, and Performance an angry red.

Using a machine like this for general productivity work is a bit like taking an F-150 to buy a box of cereal, but it’s more than possible. After all, if all you’re doing is crunching documents, writing term papers, poking at spreadsheets, and using Slack, then this has more than enough. When transcoding a 28.2GB UHD H.265 video file to 1080p, Handbrake was able to crunch through it at over 40 fps, making it sturdy enough for even halfway professional video editors. The Legion 5 Pro uses a dual-fan system that pushes hot air out of its chassis through a quartet of exhausts. Two vents at the back complement one on each side, and if you’re not blessed with vast amounts of room, beware. Leave your hand, mouse, gamepad, or drink next to one of those vents for too long, and they will become uncomfortably warm. Playing Cyberpunk and Shadow of the Tomb Raider was kicking out enough heat that I wondered if I could make s’mores.

This problem is exacerbated with the aluminum underside of the chassis, which gets too hot to touch. After a couple hours of gaming, I picked up the machine to move it somewhere else, and damn. I thought I’d picked up a baking sheet straight out of the oven and nearly dropped the thing through muscle memory. It’s not hot enough to burn you, but it’s not something you wanna touch if you value not being in pain. It’s impossible to sugarcoat the sheer noise that this machine makes when the fans spin up, either. This thing is noisy, noisy enough that you’ll need to dial your speakers up to drown it out or grab a pair of headphones to claw back some of that immersion. This is an occupational hazard of gaming laptops, but it’s worth noting that this thing is loud.   Another tick in the “not ideal” column is battery life, and despite packing an 80WHr battery, it will not last for long when divorced from an outlet. Our standard battery rundown test loops a video until the computer dies, with the brightness set to 65 percent and all battery-saving tech disabled. It managed to last for four hours and 43 minutes while using the integrated Radeon graphics, which is fine in the gritted-teeth sense of the word. Indeed, while you can handle a few emails or some light browsing while sitting on your couch, this is not a device you can take away from a socket for a full working day without fuss.

One of the reasons that the Legion 5 Pro is compelling despite some of its flaws is its price, which is something. Lenovo has managed to undercut several of its competitors here, and there’s no wonder it’s only intermittently on sale right now. If you want a machine from Alienware with similar specs (the romantically-named M15 Ryzen Edition R5 Gaming Laptop), it’ll cost you $1,899.99. For that, you’ll get a Ryzen R7 5800H (same as here), RTX 3070 with 8GB RAM (same as here), 16GB RAM, and a 512GB SSD (same as… you get the idea).

If getting RTX 3070 graphics is a dealbreaker, then you could opt for the Razer Blade 15 Base Model with a 15.6-inch FHD display, 10th-generation Intel Core i7-10750H, 16GB RAM, and a 512GB SSD. You will, however, have to pay $1,999.99 for the privilege, which may be something of a dealbreaker. ASUS also offers the ROG Strix G15 — an all-AMD version we reviewed a few weeks back — with an RTX 3070, priced at $1,799.99. If you were looking for a machine in that $1,500-or-so bracket, you could get the $1,599.99 Razer Book with a Core i7-1165G7 and Intel Iris Xe Graphics. Alternatively, for $1,499.99, Acer’s Predator Triton 300 SE packs a Core i7-11375H and NVIDIA’s RTX 3060 GPU, which seems like a pretty good deal, all things considered. Despite all of the chaos that has so far made up the ‘20s, we’re seeing a new dawn of AMD’s high-er-end chips winding up in gaming laptops. This Ryzen 7 5800H can beat (select) Intel chips in several benchmarks, and you can expect to see it crop up in several other machines across this year. And while wealthier buyers may be tempted by far pricier machines with RTX 3080 graphics, the 3070 here shouldn’t make you feel like a second-class citizen. There are lots to like about this machine, although the snips made to get its price to this level will rankle. The battery life is well below par, the thermals could do with refinement, and the webcam would look retrograde on a machine five years its senior. But, if you’re going to stick this on a desk, keep it constantly plugged into power, and never do more than the odd Zoom, does that matter?  All products recommended by Engadget are selected by our editorial team, independent of our parent company. Some of our stories include affiliate links. If you buy something through one of these links, we may earn an affiliate commission.

Rilke on the Relationship Between Solitude, Love, Sex, and Creativity – Brain Pickings