African e-commerce giant Jumia today shared its earnings for the first quarter of 2021 that ended in March. While its customer count grew, a drop in the company’s revenues showed that it is still reeling from the effects of the COVID-19 pandemic.

Most areas in Africa where Jumia operates have lifted their lockdown restrictions, but some countries like Morocco and Kenya still have curfews. Jumia said while these measures didn’t lead to meaningful changes in consumer behavior, its supply and logistics chain — especially for its food delivery business, JumiaFood — was disrupted.

Jumia, which raised more than $570 million over the past six months to strengthen its balance sheet, posted first-quarter revenues of €27.4 million. This is a 6% drop from the €29.3 million that it reported in Q1 2020. Its operating loss for Q1 2021 came to €33.7 million, while its more forgiving adjusted EBITDA loss stood at €27.0 million. The two numbers fell by 23% and 24%, respectively, on a year-over-year basis as the company continues its slow March toward profitability. 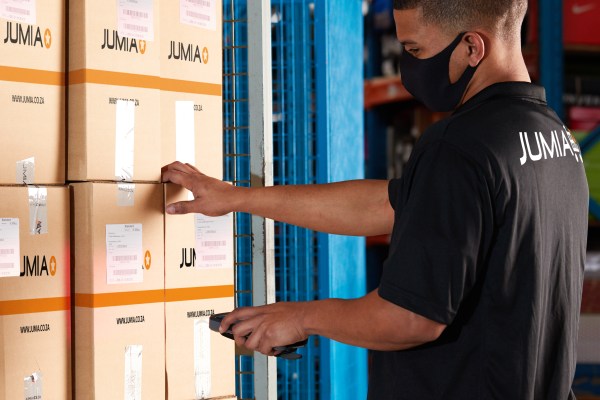 Jumia has never turned a profit, but its co-CEOs Jeremy Hodara and Sacha Poignonnec have made it clear in the past that the company wants that to change. It was also a point of reference in their investor comments today.

“Our first-quarter results reflect solid progress towards profitability. The drivers remain consistent: selective and disciplined usage growth, gradual monetization, and continued cost discipline. The first quarter of 2021 was the sixth consecutive quarter of positive gross profit after fulfillment expense, which reached €6.2 million, more than doubling year-over-year, while Adjusted EBITDA loss contracted by 24% year-over-year, reaching €27.0 million,” they said in a statement.

In addition to falling losses, Jumia had other positive metrics to share. The giant e-tailer saw its active customer base grow 7% year-over-year to 6.9 million. And orders also increased by 3% to 6.6 million, a reversal of the declining trend observed over the preceding two quarters. However, the total worth of goods sold via Jumia this quarter (GMV) was just €165.0 million, a 13% decrease from the €189.6 million recorded in Q1 2020.

Jumia cited two reasons for this drop. One was the currency devaluation of Nigeria’s naira, Egypt’s pound, and Kenya’s shilling against the euro, the currency in which it reports. According to the company, the trio dropped 15%, 9%, and 19%, respectively, against the euro in Q1 2021. And second, the company’s best-performing product category (phones and electronics) did poorly. In Q1 2020, those items accounted for 45% of its GMV volume, which fell to 37% this quarter.

Per the report, Jumia has broadened the capabilities of its payment product. It now offers SMEs on the continent access to short-term credit by leveraging business and transactional data of its sellers to pre-score credit on an anonymized basis. The company said it disbursed 380 loans in Q1 2021, up 90% from Q1 2020. These loans were given to 291 sellers across its platform, representing a 62% increase from the number of sellers that accessed last year’s loans.

Jumia reported €485.6 million of unrestricted cash at the end of the first quarter of 2021. This includes gross proceeds of about €205 million it secured from the offering completed on March 30, 2021, and €88 million cash booked in April 2021.

Before today’s earnings call, Jumia was trading at $21.60 per share. Since the market opened this morning and at the time of this writing, the company’s share price has increased by around 3.2% to just over $24.21. It seems investors remain optimistic about the company’s growth, especially its payments arm and its plans to achieve profitability, despite continued operating and adjusted EBITDA losses.