WASHINGTON — Just a half-mile from where President Donald Trump is spending his final night in the White House, twin rows of lights on the National Mall marked the first inaugural event of his successor — an implicit rebuke of Trump’s handling of the coronavirus pandemic and the 400,000 Americans it has already killed.

At 5:33 p.m., 400 rectangular lights — each representing a thousand Americans who died of COVID-19 — lit up on either side of the Reflecting Pool between the Lincoln Memorial and the Washington Monument as bells at the National Cathedral rang 400 times. The scene was set to repeat all over the country, with structures from the Empire State Building in New York City to the Space Needle in Seattle lighting up and bells ringing to honor the dead. 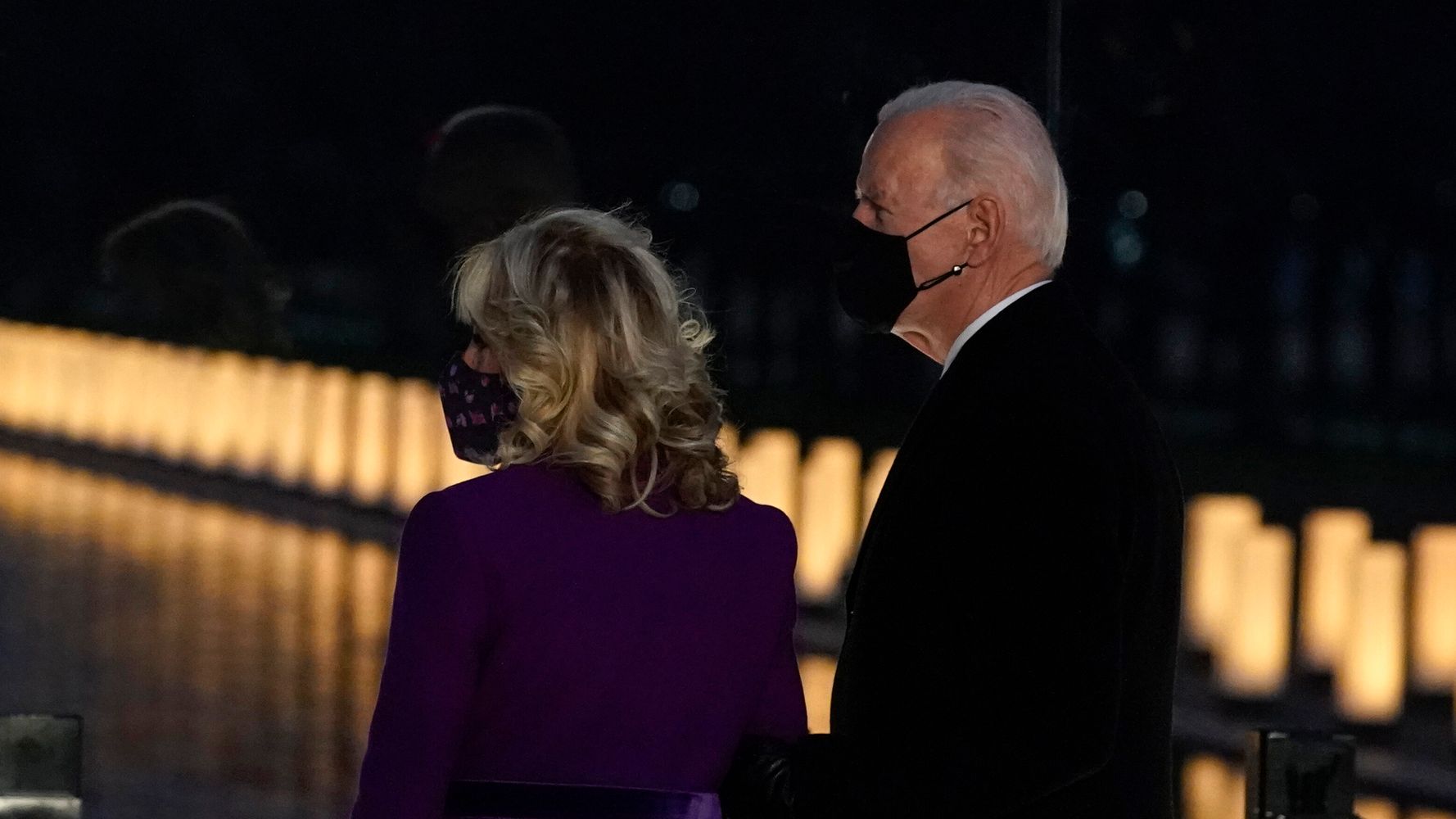 “To heal, we must remember,” Biden said in brief remarks. “It’s important to do that as a nation.” Trump’s failure to ramp up testing production or to exhort Americans to take measures to slow the disease’s spread has likely already caused 200,000 more Americans to die than might have. Germany, for example, which has an equally advanced health care infrastructure but whose leader took the virus seriously, has suffered 579 deaths per million people. In comparison, the United States has suffered 1,220 deaths per million as of Tuesday.

However, Trump has instead claimed for nearly a full year that he’s done a tremendous job and only occasionally mentioned in passing the Americans who have died. He did that again in a taped 20-minute “farewell address” he released Tuesday. “We grieve for every life lost, and we pledge in their memory to wipe out this horrible pandemic once and for all,” Trump said.

He began his COVID-19 response a year ago by denying that one was even necessary. Trump’s first public remarks on the matter came on January 22, 2020, when he claimed he had stopped the virus from coming into the country at all. He claimed it was like a cold in the coming weeks and not as severe as the flu. At a February rally in South Carolina, he told his audience that Democrats and the news media ginned up the whole thing to make him look bad and hurt his reelection prospects.

“This is their new hoax,” Trump said. Even as he continued downplaying the seriousness of the threat the virus posed, Trump began giving out death totals that would define success — and then continually shifted those figures upward as the death tally rose.

On February 26, Trump boasted there had been no deaths at all and fewer than two dozen total cases. “When you have 15 people, and the 15 within a couple of days is going to be down to close to zero. That’s a pretty good job we’ve done,” he said.

Eventually, he claimed that regardless of how many Americans died, he had done a great job because that number would have been in the millions had he done nothing at all.

“We were expected to lose if you look at the original charts from original doctors who are respected by everybody, 2,200,000 people,” Trump said at an NBC News town hall on October 15. “We saved 2 million people.”

Even after he caught the virus during one of several large gatherings at the White House with little use of masks and no social distancing, Trump failed to exhibit empathy toward other patients or their families. He recovered quickly after getting top-notch medical care at Walter Reed National Military Medical Center, which included an experimental — and expensive — treatment of synthetic antibodies, and cited his experience to suggest everyone else could, too.

“Here I am, right?’ he told a rally crowd in Allentown, Pennsylvania, on October 26. Neither the Biden transition team nor the Trump White House would say whether there was any discussion of the outgoing president and the incoming president participating jointly in the COVID-19 memorial, as might have occurred in a normal transition.

Trump, however, made clear from the wee hours of election night, when he lied that he had won reelection, that the coming handoff would be anything but ordinary.

Through the entire 11-week period, he continued telling his supporters that he had actually won and that the election had been stolen from him. His General Services Administration chief, the political appointee running the agency that administers an orderly transfer of power, refused to carry out her duty for weeks, making the task of the incoming Biden team more complex and, potentially, endangering American lives and livelihoods.

After dozens of Trump and his allies’ lawsuits to undo the election results failed over two months, the president ultimately demanded that Vice President Mike Pence unilaterally overturn it by refusing to recognize the electoral votes from several states that had voted for Biden. Pence refused, which led to Trump’s angry attack on him for lacking “courage.” That further enraged Trump’s followers, who were at that moment overrunning the Capitol to block the formal certification of the November election.

Four Trump supporters died in the rioting, as did one Capitol Police officer. In his taped farewell address, Trump took no responsibility for inciting that mob — for which he was impeached a record second time. Nor did he mention Biden by name or acknowledge that his successor had, in fact, won the election fairly.

Having A Messy House Doesn’t Make Me...