NEW DELHI (AP) — India started inoculating health workers Saturday in what is likely the world’s most extensive COVID-19 vaccination campaign, joining the ranks of wealthier nations where the effort is already well underway.

India is home to the world’s largest vaccine makers and has one of the most extensive immunization programs. But there is no playbook for the enormity of the current challenge.

Indian authorities hope to give shots to 300 million people, roughly the population of the U.S and several times more than its existing program, which targets 26 million infants. The recipients include 30 million doctors, nurses, and other front-line workers, followed by 270 million people who are either over 50 or have illnesses that make them vulnerable to COVID-19. 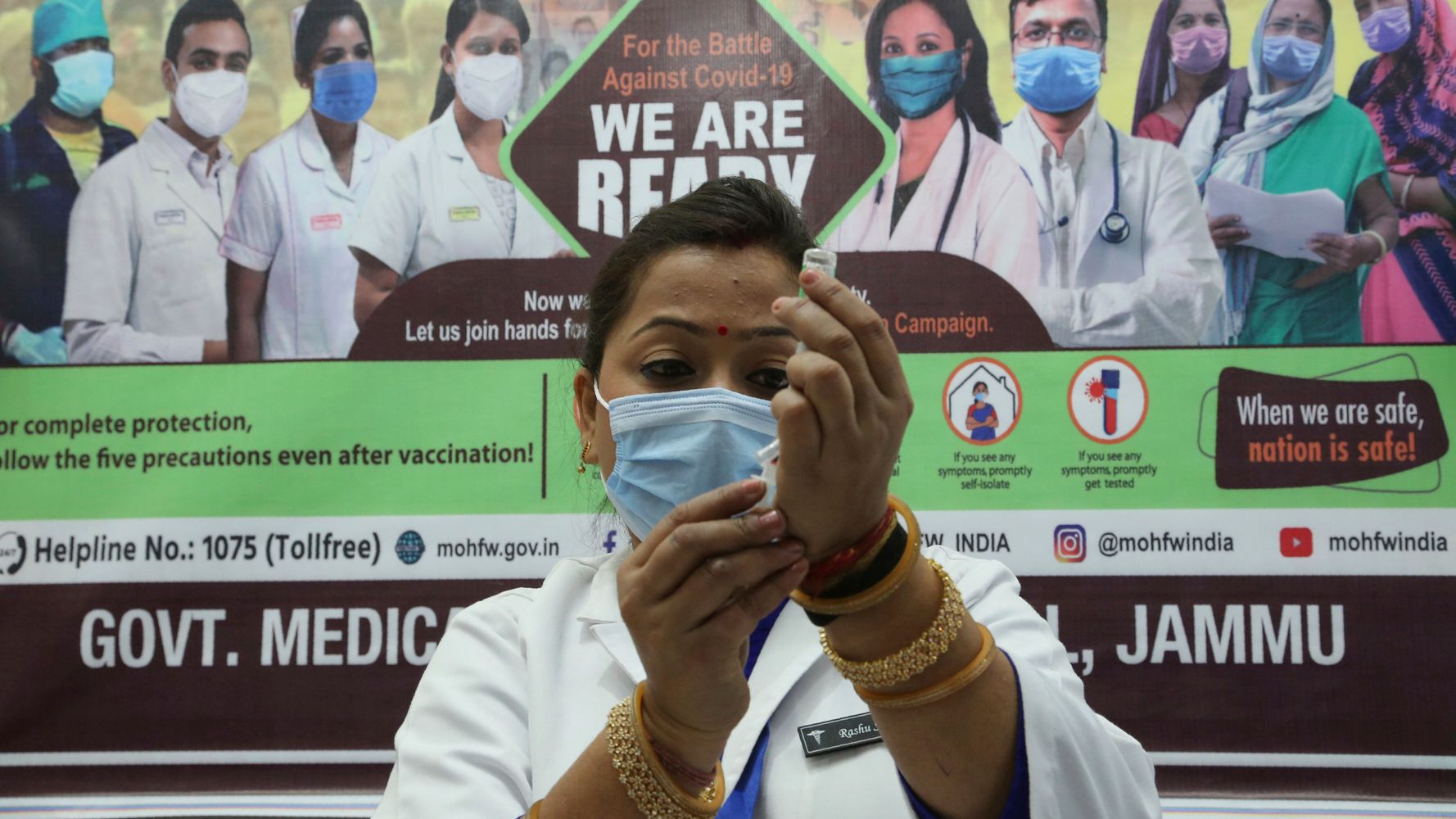 The vaccinations offered confidence that life could start returning to normal for workers who have pulled India’s battered health care system through the pandemic. Many burst with pride.

“I am happy to get an India-made vaccine and that we do not have to depend on others for it,” said Gita Devi, a nurse who was one of the first to get a shot. Devi has treated patients throughout the pandemic in a hospital in Lucknow, the capital of Uttar Pradesh state in India’s heartland. A health worker prepares to administer the COVID-19 vaccine to a doctor at a government hospital in Jammu, India, Saturday, Jan.16, 2021. India started inoculating health workers Saturday in what is likely the world’s most extensive COVID-19 vaccination campaign, joining the ranks of wealthier nations where the effort is already well underway. (AP Photo/Channi Anand)

The first dose was administered to a sanitation worker at the All Indian Institute of Medical Sciences in New Delhi after Prime Minister Narendra Modi kick-started the campaign with a nationally televised speech.

“We are launching the world’s biggest vaccination drive, and it shows the world our capability,” Modi said. He implored citizens to keep their guard up and not to believe any “rumors about the safety of the vaccines.”

It was unclear whether Modi, 70, had received the vaccine himself as other world leaders have to demonstrate the shot’s safety. His government has said politicians will not be considered a priority group in the first phase of the rollout.

Health officials haven’t specified what percentage of India’s nearly 1.4 billion people will be targeted by the campaign. But experts say it will almost certainly be the largest such drive globally.

The sheer scale has its obstacles, and some early snags were identified. For instance, the Health Ministry said there were delays in uploading the details of health care workers receiving the shots to a digital platform that India is using to track vaccines.

Shots were given to at least 165,714 people on Saturday, Dr. Manohar Agnani, a Health Ministry official, said at an evening briefing. The ministry had said that it aimed to inoculate 100 people in each of the 3,006 vaccination centers across the country.

News cameras captured the injections in hundreds of hospitals, underscoring the hope that getting people vaccinated is the first step to recovering from the pandemic that has devastated the lives of so many Indians and bruised the country’s economy. India is second only to the U.S. in confirmed cases, with more than 10.5 million. The country ranks third in deaths, behind the U.S. and Brazil, with over 152,000.

But doubts over the effectiveness of the homegrown vaccine have created a hurdle for the ambitious plan. Health experts worry that the government’s approval of the Bharat Biotech vaccine could amplify vaccine hesitancy without concrete data showing its efficacy. At least one state health minister has opposed its use.

“In a hurry to be populist, the government (is) taking decisions that might not be in the best interest of the common man,” said Dr. S.P. Kalantri, the director of a rural hospital in Maharashtra India’s worst-hit state. Kalantri said the regulatory approval was hasty and not backed by science.

In New Delhi, doctors at Ram Manohar Lohia Hospital, one of the largest in the city, demanded they be administered the AstraZeneca vaccine instead of the one developed by Bharat Biotech. A doctors union at the hospital said many of its members were a “bit apprehensive about the lack of complete trial” for the native vaccine.

“Right now, we don’t have the option to choose between the vaccines,” said Dr. Nirmalaya Mohapatra, vice president of the hospital’s Resident Doctors Association.

The Health Ministry has bristled at the criticism. It says the vaccines are safe and that health workers will have no choice in deciding which vaccine they get.

Against the backdrop of the rising global COVID-19 death toll — it topped 2 million on Friday — the clock is ticking to vaccinate as many people as possible. But the campaign has been uneven.

In wealthy countries, including the United States, Britain, Israel, Canada, and Germany, millions of citizens have already been given some measure of protection by vaccines developed with revolutionary speed and quickly authorized for use.

But elsewhere, immunization drives have barely gotten off the ground. Many experts predict another year of loss and hardship in places like Iran, India, Mexico, and Brazil, which account for about a quarter of the world’s COVID-19 deaths.

According to the University of Oxford, more than 35 million doses of various COVID-19 vaccines have been administered around the world.

While most of the COVID-19 vaccine doses have already been snapped up by wealthy countries, COVAX, a U.N.-backed project to supply shots to developing parts of the world, has found itself short of vaccines, money, and logistical support help.

As a result, the World Health Organization’s chief scientist, Dr. Soumya Swaminathan, warned this week that it is doubtful that herd immunity — which would require at least 70% of the globe to be vaccinated — will be achieved this year.

“Even if it happens in a couple of pockets, in a few countries, it’s not going to protect people across the world,” she said. Associated Press writer Biswajeet Banerjee in Lucknow, India, contributed to this report. Calling all HuffPost superfans Sign up for membership to become a founding member and help shape HuffPost’ssnext chapter.