One evening, when I was 13, my dad asked me if I wanted to go on a run.  I had never gone on a run before, but I figured if my dad could do it, I could, too. Dogs barked as we made our way down country roads. The setting sun was making the fields and trees golden, and the path seemed to have no end … and I didn’t want it to. I felt like my whole world was opening up.


After that, I started running with my dad more often. Neither of us was any good, but never once did my dad stress about the time on the clock. We just went out and enjoyed ourselves. 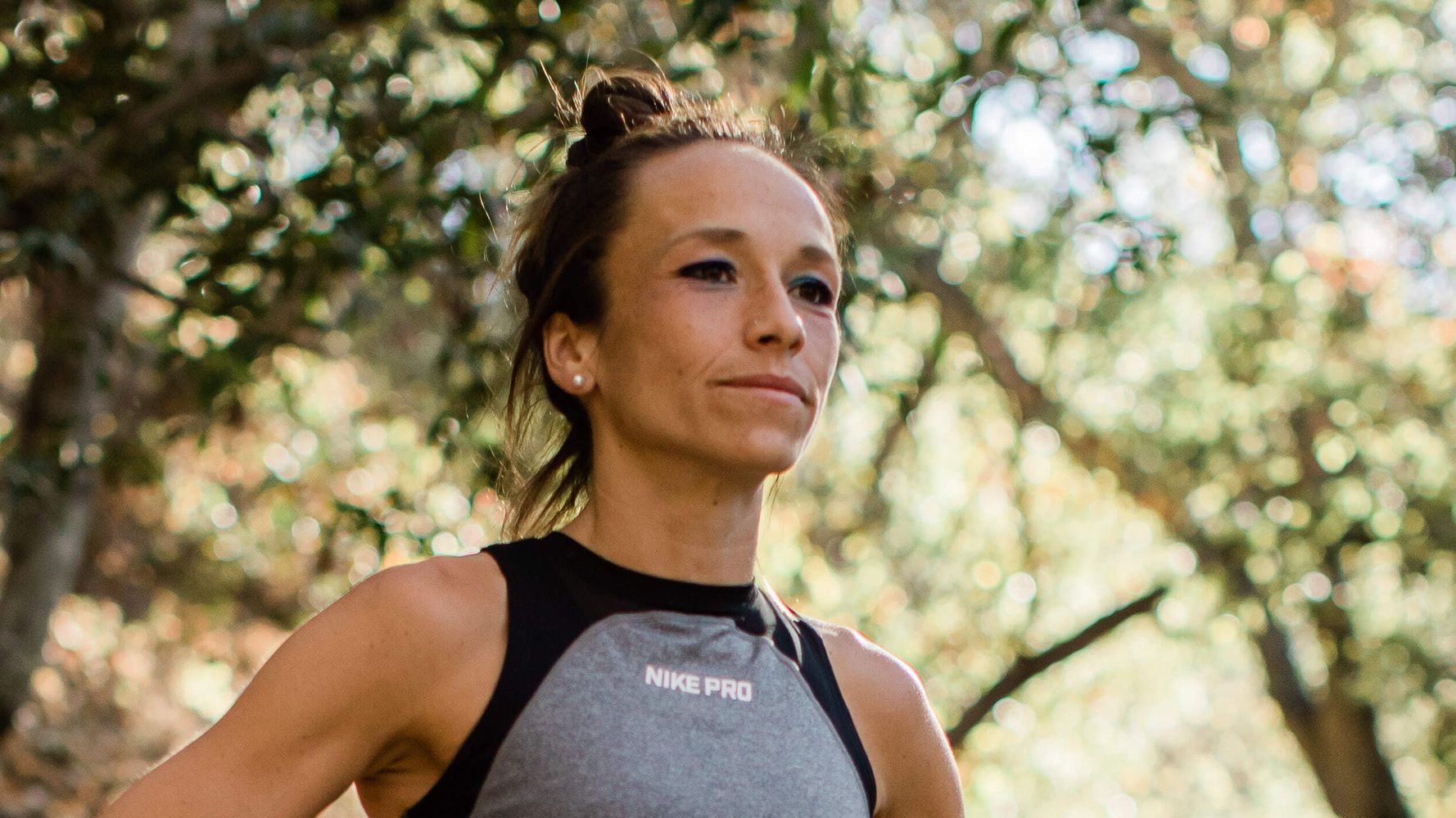 My mom said she wasn’t surprised that I loved to run because once, when I was 3, she took my brothers and me down to a park with a track, and I kept running loops nonstop. She said it seemed like I was born to do it.


Unfortunately, at age 15, everything came crumbling down while the innocence of childhood waned and mental illness crept in. I became anorexic in the ninth grade, and all of my ideas about who I was in this world felt meaningless compared to my one and only goal of disappearing.

During that year, I had an exercise addiction and eating almost nothing, and my love of running turned into just another ritualistic task that had to be performed.

As often happens in anorexia without proper treatment, I reached a point where my body couldn’t function any longer at max capacity as I starved. I began eating everything in sight and quickly entered into 10 years of my own personal hell: severe bulimia that distorted my view of reality even further. I had difficulty enjoying running anymore as my electrolyte levels would leave me disoriented, and I often felt depressed.

I joined a running group to try and keep myself connected with the world and out of my binges and purges that happened five to 10 times per day. I was always anxious to get home and be alone with my bulimia again. It was the demon I couldn’t escape and ultimately landed me in an in-patient treatment program that saved my life.


I was dedicated to my recovery plan and desperate for new behaviors. I viewed my time in the hospital as my one chance to get my life back. After successfully completing and exiting the program, I followed the guided recommendations precisely: three meals and two snacks. No exceptions. But there was another rule during treatment: no exercise. I was confused about my relationship with running and whether it was OK for me to do it again. I knew I wanted to run. I felt healthy and strong for the first time in over a decade.


I was in group therapy still at the time and consulted the therapist. She said that if running brought me joy, by all means, I should do it. So, I did. A year of group therapy later, I started off on my own, confident that I could sustain my recovery without a hand to hold.

I was confused about my relationship with running and whether it was OK for me to do it again. I knew I wanted to run. Four years of healthy behaviors and casual running later, the manic energy that had been part of my mental illness started screaming at me. I found myself wanting to isolate and engage in behaviors I knew would destroy my life again. Then, I had a thought. What if I could channel this manic feeling away from destructive behavior patterns and into some faster running?

I had never done a speed workout before and was a slow runner. In fact, up until this moment, I had always held the belief that this is who I was: Vanessa, the untalented runner. But like many other false beliefs I held about myself and deconstructed in treatment (Vanessa the worthless failure … Vanessa the disappointment), I thought it was time to challenge this one the way I was taught to push back on the others.


I was curious about what it would take to qualify for the Boston Marathon, so I looked up a training plan online. The previous 26.2 I had attempted had taken me over five hours. Boston was asking for a 3:35. I decided to go for it.


I woke up at 4 a.m. to run on the first day of training. It felt like magic. It was the moment in a movie when the protagonist has a grand epiphany that the trajectory of her life is about to catapult her into something extraordinary and unknown.


I completed the first workout without dying. Then the next. Then the next. Every day for four months, I was able to sustain a healthy mental state as my manic energy was transmitted to running hard in the mornings and maintaining physical wellness and proper nutrition through each day.


Though on the surface, my training was for the Boston marathon, it was indeed a self-appointed prescription to ride out manic/depressive urges and be able to function well in regular life by doing the thing that I loved.

After breaking down my narrative of “Vanessa, the untalented runner”, achieving the goal in four months felt like an awakening. I was rediscovering who I believe I was created to be.

I started paying attention to professional female athletes in the marathon field. I secretly began to wonder if I had what it took to someday qualify for the Olympic marathon trials.


I kept this dream to myself as I continued to train harder. Qualifying for the Boston Marathon is usually the level of bragging rights a mere mortal achieves, with the next ultimate achievement, Olympic trials, being comically out of reach.

Qualifying for the Olympic Trials in the marathon requires a time of 2:45 (women) or 2:19 (men). There are several marathons in the U.S., open to anyone that registers, that are qualifying races. Marathon running is one of the only sports where the average person is lined up with a field of professionals in the same race.


I decided not to pour any money into the endeavor other than my sneakers, which I have had to switch out every two months because of the unprecedented mileage I put on them. All I had was manic energy, a love of running, and a self-modified training plan that I found when I Googled “Marathon training.”


Breaking down my narrative of “Vanessa the untalented runner” felt like an awakening. I was rediscovering who I believe I was created to be. Since then, I have done all my hard workouts on a treadmill in my garage for precise pacing and without any music — to maintain the mental fortitude required for things like eight one-mile repeats at a pace of 5:39/mile. Besides, runners trying to qualify for the Olympic marathon trials are not allowed to have any music during the race. If you are caught with earbuds, it’s an automatic disqualification even if you meet the standard.

After a year, I placed second in a half marathon race. Two years later, I am now averaging over 100 miles per week of running, am self-coached, and plan to achieve a qualifying time for the Olympic trials by 2022 and compete in Atlanta against the top women in the marathon in 2024. I have gone through two training cycles that indicate I am on target to achieve this dream.

The truth is, I won’t become an Olympian. The natural elites are achieving times of sub-2:30. They are machines. Most have been groomed for greatness since their teen years. Why is the qualifying window for trials so large? I like to think it’s for women just like me who want to push toward the seemingly impossible to find out what they are capable of.


Besides, my Olympic trials dream has very little to do with becoming one of the top female runners in the U.S. After losing myself to mental illness for well over a decade, it has been my guiding light back to who I was meant to be. I have healed on trails in the dark hours of the morning. As the sun rises, the darkness of my mind dissipates.

My mind is no longer consumed or trapped when I am with loved ones. Whatever part of myself gets poured out of me like a fountain with each step toward my dream. I am that 3-year-old girl once again, joyfully running circles on the track. I am, beyond a shadow of a doubt, born to run.

Do you have a compelling personal story you’d like to see published on HuffPost? Find out what we’re looking for here and send us a pitch! If you’re struggling with an eating disorder, call the National Eating Disorder Association hotline at 1-800-931-2237.

Tips To Prevent Dental Emergencies And What...