I had two minutes to find a bathroom. I didn’t have a find-a-potty app on my phone because I couldn’t preplan these events, and preparing for them ― even thinking about them ― sometimes made me need to go. In these moments, I also didn’t have time for apps, and in this situation, here in Millbrae, California, I already knew where the closest restroom was: in the nearby Trader Joe’s.

Sitting in my car, I feared I didn’t have time to walk across the parking lot and down a hundred feet to the market’s front door. I couldn’t see the storefront from my car. Had a line formed? I’d often seen one outside the store during the pandemic. And I’d misplaced my “I can’t wait” card to show people in a queue or place of business. Why had I not replaced it? 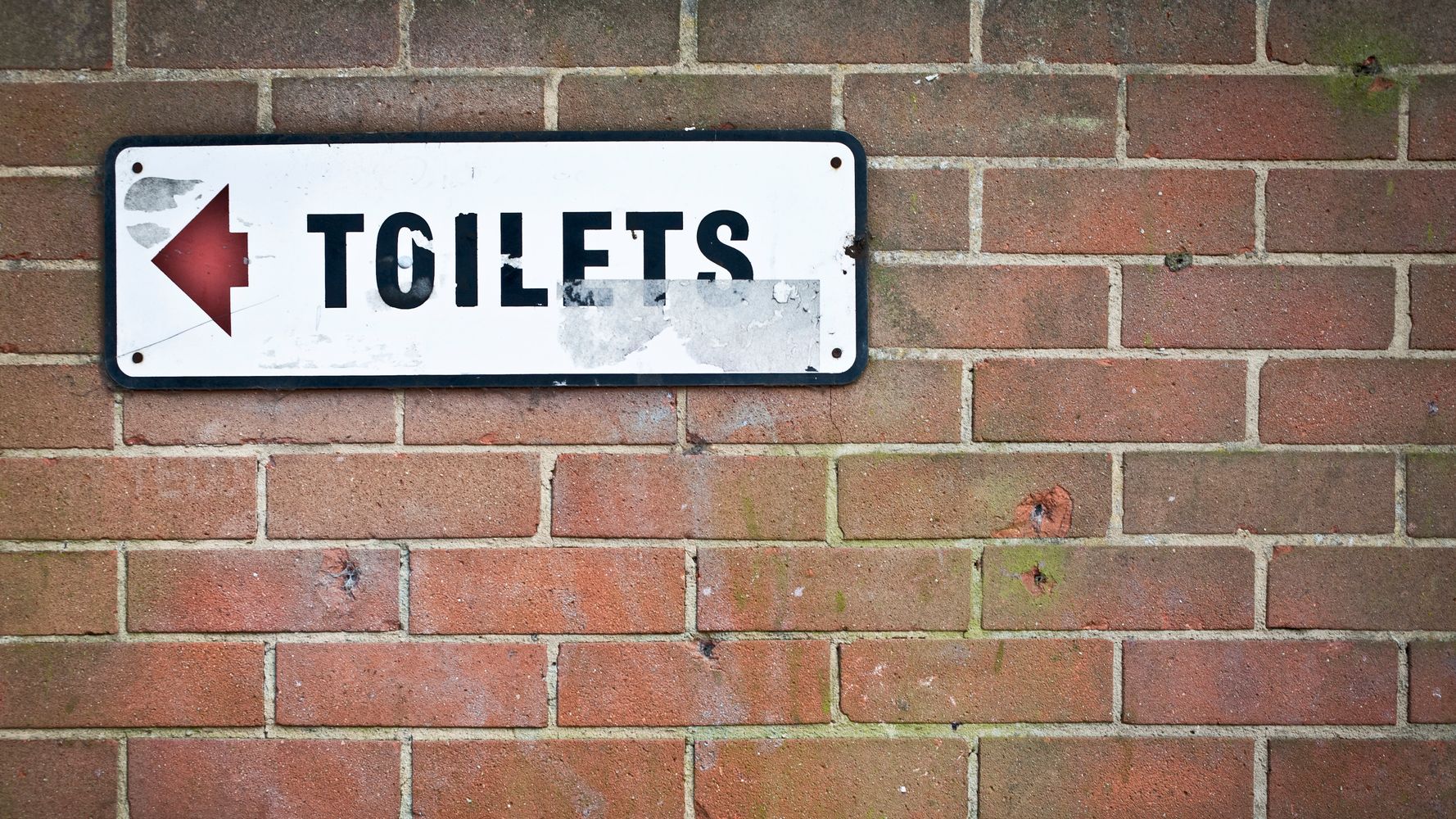 I’d never been inside that Trader Joe’s. If the bathroom’s location was not immediately apparent, I might need to accost a roaming employee to ask where it was and whether a key was required. Or I’d proceed to the customer service desk, where I might need to clear my throat repeatedly or blurt out, “Excuse me, where is the bathroom?” to command attention. Or, most precariously, if I found myself fifth in line at the said desk, I might have to strain to contain my diarrhea by taking deep, allegedly calming breaths and visualizing it retreating up into my colon, all while pretending that nothing was amiss inside my body.

I ditched the Trader Joe’s option.

There are times when life asks us to think on our feet. This was such a time. I scanned my surroundings and noted the bushes bordering the parking lot. There was no time to assess if anyone might see me from the windows of a nearby building. I dove behind a bush and did my business.

Bathroom access is a challenge in America, particularly during COVID-19. Restroom apps are “hit or miss,” according to Tim Pyle, executive director of the American Restroom Association. The ARA website lists more than a dozen categories of people affected by “restroom duress.” In The New York Times, Nicholas Kristof recently noted that people experiencing homelessness have to confront that problem 24/7. In contrast, taxi drivers, tourists, delivery people, and others out for the day must stay on the lookout. Likewise, parents on outings with small children. “And what about people with medical conditions that require more frequent urination or defecation?” Kristof asked.

In addition to the millions of Americans who experience medically caused urinary incontinence, 25 to 50 million people deal with celiac disease, inflammatory bowel disease, and/or irritable bowel syndrome, all of which can cause diarrhea — as can other chronic medical disorders, prescription and nonprescription meds, and intestinal infections, as well as immunotherapy treatments for cancer. The list goes on and on. And if you take into account caffeine overloads and foods that simply don’t agree with people, this much is clear: Pandemic or not, there is a whole lot of diarrhea going on in public at any given time. Yet, people often avoid the topic, myself included.

Since the Nixon administration, I’ve had the runs on and off, and I have rarely mentioned my situation to anyone, including those closest to me. Only my doctors really knew about my episodes, and sometimes I’d spared even them the details for decades.

Crohn’s disease barged into my life on an end-of-summer family vacation before I started high school. I threw up on my oldest brother’s lap in the back seat of our car. We thought I was just carsick. Then I vomited some more, often at night, in the trash can that my brother set up between our motel-room beds.

That’s how I was first separated out from the healthy. Who knew barfing on your brother could mark the line in one’s sand? Crohn’s, a type of IBD now on the rise, caused me to have anemia, bowel obstructions, fatigue, fevers, fistulas, infections, pain, vomiting, and weight loss, as well as loose stools. Multiple bowel resections also resulted in my ingested food moving more quickly down my personal pike. And no, per my doctors, I couldn’t take Imodium for years on end to treat my noninfectious, incurable, and often debilitating illness.

At 14, I quickly learned that the people around me really didn’t want to discuss a “bathroom disease.” So I didn’t talk about it. During first-period Introductory Physical Science, I constantly raised my hand to ask to be excused. I made my way down that long high school corridor to the restroom on a razor’s edge, petrified I’d get sick in front of my peers.

I didn’t talk about it in college. One night on campus, with no loo in close range, I had no option but to sit cross-legged between a sidewalk and a patch of ivy, cover my midsection with my backpack, and empty my bowels in the briar. I exchanged pleasantries with fellow students as they ambled by. Out of necessity, I later told my roommate what had happened, then swore her to secrecy.

I didn’t talk about it during my heavy-lifting mom years. More than once, I peeled off Highway 101, screeched into a McDonald’s parking lot, and got three kids out of the car with strollers and diaper bags and toddler meltdowns in the mix, shouting “I have to get to the bathroom,” and the four of us somehow miraculously landing there.

A Northern California beach. Cornfields in Nebraska. Bergdorf Goodman. From sea to shining sea, plus a whole lot in between. Sometimes I didn’t make it, and those were the most humiliating times of all. Like when I walked with my husband in our neighborhood during shelter-in-place last year. Or when I found myself in that parking lot next to that unfamiliar Trader Joe’s. Then there were the times I didn’t even make it to a bush. When that happened, all I could hope was that I wasn’t too far from home or that I had a change of clothes with me.

Along the way, I encountered the kindness of strangers. Or maybe those strangers had experienced similar bowel issues, at least occasionally. On average, U.S. adults experience acute diarrhea about once a year.

I used to ask, “Might I use your restroom?” while hoping my desperate look accurately conveyed my urgency. Eventually, I began to add “I have an intestinal disease” to my bathroom requests. The more specific the words I used, the more people seemed to understand.

One June day a few years ago, I had just arrived in New York City via train from Washington, D.C., feeling a bit rough around the edges after attending a wedding reception the night before. As I stood outside Penn Station and got my bearings, the clarion call sounded. I hauled into the nearest Duane Reade, latched on to a kind-looking employee who seemed to have time to spare, and spilled my updated elevator pitch.

There wasn’t a bathroom I could use in the store, but she offered to watch my suitcase. The two of us hoisted it up and jammed it behind the counter, a twosome bound by one mission. “Now run across the street and into that McDonald’s,” she said, pointing and explaining exactly where I would find the restroom. Her quick thinking saved me that day, and I was beyond grateful for it ― and for her kindness.

Earlier this year, I took another step on the road to having open, honest, and genuine encounters. I actually named my disability — and even talked details. One evening, not far from my home in Northern California, I stepped into a Walgreens. While chasing surplus COVID vaccines there the week before, I’d asked to use the restroom, only to be told it was closed. So, with my investigative-journalism hat on, I returned for a bathroom-access update.

I asked for the store manager, curious what the person in charge might say.  “Yes, the bathrooms are still closed,” she informed me.  “I was in here last week,” I explained. “I have Crohn’s disease. The bathrooms were closed then, too, and sometimes I just can’t hold it.” She could have responded TMI or Ew, gross! Crossing her arms over her eyes to shield herself. Instead, from above her mask, her unshielded eyes met mine with grace and compassion.

“You could have asked for me and explained you have a medical condition,” she said. “I get it. I’m going through chemo, and sometimes I just can’t hold it either.” “I’m so sorry,” I replied, wanting to acknowledge the weight of her revelation. Then, for a snatch of minutes, we just talked. It felt so restorative, standing there together, masks on, pretenses off.

Trust me, writing this piece and having it published on an international website isn’t my idea of a good time. Yet, I’ve learned that when put right, words defrock shaming. Post-Walgreens, I recalled all the times I hadn’t spoken up, the times I’d yearned for words that I couldn’t form. All that silence — it had veiled, rejected, and invalidated my experiences.

It’s not easy talking or writing, about diarrhea, especially when it’s your own. There is a lot of shame tied up in having a bathroom condition we rarely talk about openly. Trust me, writing this piece and having it published on an international website isn’t my idea of a good time.

Yet, I’ve learned that when put right, words defrock shaming. They are silence’s comeuppance. And I’ve had decades’ worth of words saved up, a stockpile that wouldn’t stop clamoring to be written.

The more we talk about all this, the less embarrassing or “disgusting” or scary it’ll be. If we remember, we’re all human beings; we can reach across aisles, whether in Walgreens or in Washington. That’s when real change can happen — offering more assistance and understanding to one another, integrating better restroom planning into architectural design, and providing the funding for plenty of clean, available, and accessible public restrooms.

Having diarrhea is difficult. Having diarrhea and having no place to go is even worse. So let’s talk about it, destigmatize it and treat people with more kindness. Let’s make going to the bathroom — and finding toilets — more straightforward and better for everyone.

Alison Carpenter Davis, a former managing editor at Outside magazine, has written for the Chicago Tribune, The Independent (U.K.), the International Herald Tribune, and Stanford Magazine. She co-founded the Disability at Stanford Oral History Project and is working on a memoir, “Gutsy.” For more from her, head to LinkedIn and her Twitter page.