MIAMI (AP) — As coronavirus cases continue to soar, two Florida mayors are announcing mask and vaccine mandates and defying the governor, who is firmly opposed to any pandemic restrictions. Masks will again be required at indoor county facilities in Florida’s populous Miami-Dade following new federal guidelines recommending that even people vaccinated against COVID-19 should wear facial coverings.

And in Orange County, home to Walt Disney World and Universal Orlando Resort, the mayor went a step further. He announced all 4,200 nonunion county employees will be required to get their first coronavirus vaccine shot by the end of August and the second shot by the end of September. Disney World announced on its website Wednesday evening that beginning July 30, face coverings will be required for all guests ages 2 and up while indoors and in Disney buses, monorail, and Disney Skyliner, regardless of vaccination status. This includes upon entering and throughout all attractions. Face coverings remain optional in common outdoor areas.

“We want to keep our county and theme parks open for business,” Mayor Jerry Demings said at a news conference Wednesday. “By instituting these measures, we want everyone to know, in Orange County, Florida, we take the coronavirus seriously.”

Miami-Dade County Mayor Daniella Levine Cava said her decision responds to the surge in new cases and hospitalizations. The mayors didn’t announce any mandates for businesses but pleaded with them to help get their employees vaccinated and urged them to again implement masks. “We have all come too far. We have all sacrificed too much in this past almost year and a half. We cannot turn back now,” Levine Cava said 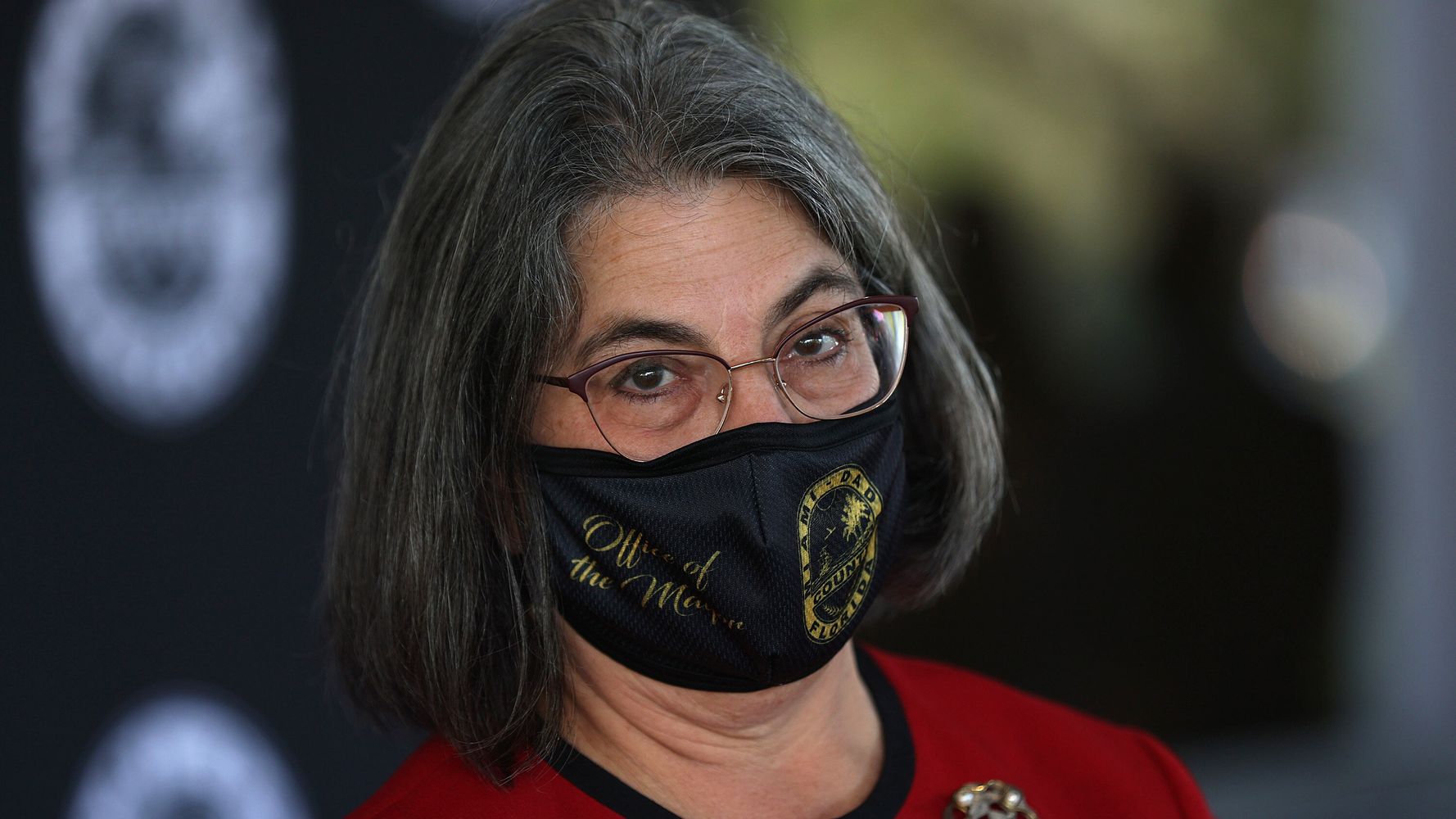 A state law signed in May gives Republican Florida Gov. Ron DeSantis the power to invalidate local emergency measures put in place during the pandemic, including mask mandates and limitations on business operations. It also bans any business or government entity from requiring proof of vaccination. The governor’s office did not immediately respond to a request for comment on the new local mandates.

For the more than 3,000 unionized workers in Orange County, Demings said officials were negotiating a similar vaccine requirement as nonunion employees. Some can be exempt for religious or health reasons, but others who fail to comply will face disciplinary action, Demings said.

The delta variant of the coronavirus is causing infection surges across the U.S., with Florida accounting for a fifth of the nation’s new cases last week, more than any other state, according to the U.S. Centers for Disease Control and Prevention. Hospitals have seen admissions soar, with the vast majority of the patients unvaccinated.

On Tuesday, the CDC changed course on some masking guidelines and recommended that even vaccinated people wear masks indoors in areas of high transmission. Officials cited new information revealing the variant’s ability to spread among vaccinated people.

All 67 of Florida’s counties are considered areas of high transmission, meaning they have had more than 100 new cases per 100,000 people in the past seven days.

DeSantis has remained staunchly opposed to restrictions, mask mandates, and vaccine passports, a stance central to his reelection campaign. He was defiant Wednesday as he criticized the new CDC guidance during a Salt Lake City gathering of the American Legislative Exchange Council. This group pushes conservative policies in Republican-controlled state legislatures.

“I think it’s essential we say, unequivocally, ‘No to lockdowns, no to school closures, no to restrictions, no to mandates,'” he said. Democratic Agriculture Commissioner Nikki Fried, who is running to challenge DeSantis in 2022, suggested that local governments get creative about measures and vaccine campaigns.

“Local governments are handcuffed right now about what they can do,” Fried said at a news conference Wednesday before the announcement of the two mayors. “We are stuck in a situation that all we can be doing is giving information out there, encouraging people to do what’s right for their communities.”

Earlier this week, DeSantis hinted at a bill to oppose mask mandates in schools, a decision that is still up to school districts. The CDC on Tuesday also recommended indoor masks for all teachers and students nationwide, regardless of vaccination status. DeSantis predicted lawmakers would hold a special session to address the issue, saying “our Legislature feels strongly about it.”

School board members in Broward County held a special meeting Wednesday to discuss mask-wearing. A day after, roughly two dozen mask opponents disrupted the meeting in screaming matches and burned masks outside the building. Board members agreed to continue requiring acts for at least the beginning of the school year, making it the first district in the state to do so. Miami-Dade school officials have said they reconsider their mask policy following the recent CDC recommendations, but no decision has been made.

Vivian Hug, a Navy veteran, brought her twins with her as she addressed board members, saying she was tired of giving up “freedoms in the name of safety.” “Please stop the insanity. You have already done damage to these kids having to wear masks,” she said before putting her daughter up to the microphone. The young girl complained that she can’t breathe when she wears a mask and gets headaches from them.

Mental Health In The Schools – The Problem...

Fructosamine Test Today and Get Your Blood...