Flight Attendant Abuse Is Escalating. Here’s How Passengers Can Help.

This has been a tough year to be a flight attendant. As of Aug. 30, the Federal Aviation Administration had received more than 4,000 reports of unruly passengers.

In May, one “air rage” incident resulted in a Southwest Airlines flight attendant losing two teeth and suffering other facial injuries. In August, an Oregon man was arrested on battery charges after allegedly striking an American Airlines flight attendant who asked him to properly wear his face mask. In July, a Frontier Airlines passenger was taped to his seat and arrested after punching one flight attendant and groping two others. The incidents that have made headlines are only a fraction of the reality.

“I was targeted on a layover and almost physically assaulted by 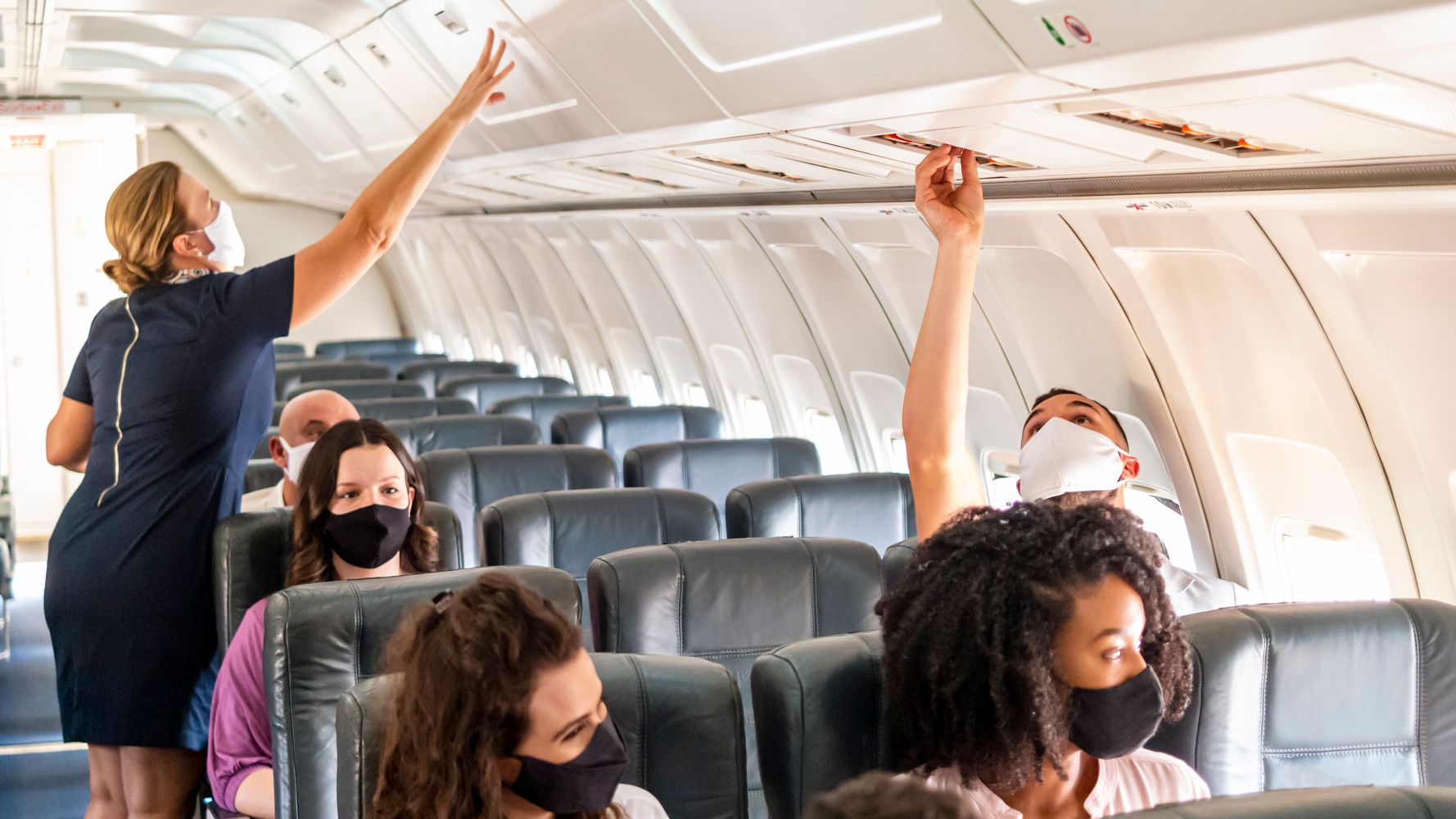 three passengers from my flight, all because of mask enforcement issues,” Brenda Orelus, a flight attendant and founder of Krew Konnect, told HuffPost. “I literally had to call the police to safely escort me home. Things have gotten so bad [the Transportation Security Administration] started offering free self-defense classes for flight attendants.”

Sara Nelson, the Association of Flight Attendants-CWA president, told HuffPost that the union has received an “exponentially higher” number of calls about mental health concerns, with crew members reporting anxiety about job security, finances, and health and, increasingly, safety on the job.

“There’s one story that really haunts me,” Nelson said. “A flight attendant was walking down the aisle giving the last safety instructions, and a passenger didn’t like it and pulled his elbow back and rammed it into her side. He completely knocked the wind out of her, and she didn’t see it coming. Imagine experiencing that. How do you put that uniform back on and do the job knowing that the safety instructions flight attendants have been giving for decades are now a trigger that makes someone act out?”

Most people are rightly horrified by the stories of flight attendant abuse emerging lately. And although you may feel helpless as a passenger, there are actually ways you can help improve the situation.

We asked Nelson, Orelus, and flight attendant Stella Connolly to share what passengers can do to help flight attendants, especially in more intense moments. Read their advice below.

Understand the job of a flight attendant.

“First and foremost, flight attendants are on the plane to ensure the safety, health, and security of our passengers,” Nelson said. “We have a series of safety protocols that we are charged with ensuring people follow. The latest is the addition of the required mask, which is important for many reasons. We have children on the plane who haven’t had access to the vaccine. We have vulnerable populations on the plane. We may have people flying for medical reasons.”

Nelson stressed that mask-wearing is just one more passenger requirement flight attendants enforce ― on top of buckling seatbelts, stowing luggage, not smoking, and keeping seats in an upright position for takeoff and landing. She also noted that air travel has rules restricting things you can do in other situations ― like carrying your gun or knife.

“Flight attendants have to enforce all of these rules to keep people safe,” she said. “No flight attendant is coming with their own agenda here. If everyone’s not wearing a mask, there’s a risk of exposure and spread, and that affects everyone. Everyone is asked to wear their seatbelt during turbulence because if you get thrown up in the air, you don’t just hurt yourself; you hurt other people when you come down on top of them.”

Connolly echoed this sentiment, noting that the flight attendants and travelers on a plane share a common goal. “Passengers should keep in mind that we want to get them to their final destination as safely and efficiently as possible,” she said.

Every flight attendant who spoke to HuffPost said the most helpful thing passengers can do is follow federal guidelines and crew member instructions during air travel. Modeling the correct behavior helps foster a culture of cooperation on board.

Nelson explained that flight attendants are “the helpers” to look to in times of crisis and otherwise are working to make the flight experience as smooth as possible.

“Do what you can to be kind to other people and lift up the helpers,” she advised. “That will show other people the truth of the travel experience ― that we’re actually nice people, believe it or not.”

Nelson also emphasized that people travel for a lot of different reasons. Often it’s something upsetting, like the death or illness of a loved one or for their own medical reasons. Others may simply feel stressed out because they’re traveling with their whole family and there’s a ton of chaos. That’s why it’s essential to give people grace and realize that everyone is dealing with some level of stress ― including flight attendants.

“Remember, you cannot say you love to travel and disrespect your flight attendants,” Orelus said. “Without us, commercial travel would not be possible, and that’s federal law. So next time you fly, be kind and encourage your neighbors to do the same because flight attendants are going through enough.”

“If a passenger sees something untoward, they should notify a crew member,” Connolly said. Issues can range from medical emergencies to lithium battery fires to passengers refusing to comply with crew instructions or even threatening violence against people on board.

“We ask that passengers be good witnesses,” Nelson said. “Advise a flight attendant as quickly as possible. Use your call button to ring for help. Don’t take matters into your own hands. Little problems can become big problems at 10,000 feet in the air, where there’s no way to walk away from the issue.”

“In the unlikely event of an unruly situation on board, passengers should always follow crew member instructions,” Connolly said.

Flight attendants have received training to deal with all manner of conflict on board. Other passengers can help by assisting when asked.

“We may give direction to other passengers to help us contain the problem,” Nelson said. “It might be as simple as asking someone to change a seat to create more space or to separate from the conflict. We are also trained if necessary in how best to instruct restraining someone on board.”

Nelson noted that sometimes other trained airline employees are deadheading (traveling onboard free to get to the next job destination), so there might be other helpers on the plane who can step up and give instructions.

“Passengers who are looking to take their aggression out on us will often think twice about it if another passenger intervenes and admonishes their behavior,” Orelus said.

She explained that these explosive situations that make headlines are rarely split-second reactions. Instead, they result from passengers brewing emotions in a tense environment for an extended period. It may start with disrespectful remarks and lack of cooperation and then escalate to physical violence. But other passengers can help defuse the tension before that happens.

“Having someone step in on our behalf and say ‘No, this abuse is not OK’ really goes a long way and can even prevent a violent altercation,” Orelus said. “Stop it before it gets too far, at the first sign of disrespect, which could come in the form of yelling, name-calling, profanity, rude hand gestures, etc. If you personally witness it, politely reprimand the abuser.”

She suggested speaking calmly and saying things like, “Could you lower your voice, please? It is impolite to yell”; “Excuse me, sir/ma’am, while I understand you are upset, please don’t use profanity when speaking to him/her ― it is inappropriate”; or “Sir/ma’am, please do not call the flight attendant names ― it is inappropriate and makes us all uncomfortable.”

Nelson described these sorts of comments as a sort of “positive peer pressure scenario,” which can be helpful. She suggested using statements like, “Come on, let’s all get along here” or “Let’s all follow the rules.”

Prepare for your trip.

Travel can be a stressful experience, particularly in the era of COVID-19, but passengers can do their part by preparing for their journeys and reducing the overall tension. A significant component of that is factoring in extra time.

“For a smoother passenger experience, come to the airport four hours early and pack your patience!” Orelus said, laughing.

She explained that airlines are staffing just enough to meet basic needs right now, so most will not have as many gate agents, additional helpers or extra frills you may have been accustomed to.

“Lines will be long, seating will be limited, so the best thing you can do is give yourself enough time to be patient,” Orelus said. “This will cut down tremendously on the frazzled feeling many get on travel days.”

Nelson pointed out that we’re not currently experiencing “the normal airport and airplane ecosystems” because the proportion of seasoned flyers traveling in a given day has been lower amid the pandemic. This contributes to longer TSA lines and busier flight attendants as the less-experienced travelers need to hear instructions and reminders multiple times. Food and drinks are also more limited at most airports now.

“Remember that you’re human, and, as such, you need to eat, sleep and be comfortable in your environment,” Nelson said. “There will be varying degrees of hot and cold throughout your travel experience, so wear layers to respond to different environments. Pack an additional mask because you might sweat and feel uncomfortable in your wet mask. Bring a protein bar or something so you can feed yourself if you aren’t able to get something to eat at the airport.”

Connolly advised allowing more time to get to your destination if possible, like booking your flights for a day earlier than you usually would.

“Passengers can help us by building in a little more flexibility than maybe they would during pre-COVID travel,” she said. “This will reduce their stress and ultimately help everyone by creating a calmer environment.”

Lay off the alcohol.

“It’s important for people to understand that the vast majority of these events also include alcohol as a contributing factor,” Nelson said, pointing to many of the highly publicized instances of flight attendant abuse. “Clearly, alcohol does not help make good decisions about how you’re going to behave. And a lot of people aren’t aware that alcohol affects you differently in the air.”

She noted that passengers are not permitted to drink their own alcohol on a flight or in the airport ― only airport bartenders and flight personnel can serve you. Regulations also allow for gate agents (who have faced their fair share of passenger abuse) to deny boarding to anyone who appears to be too intoxicated. And even if you can board, you are not free to be unruly on board.

“There are real consequences with interfering with a crew member,” she explained. “You could have to pay $35,000 per incident and face up to 20 years in prison. People should be aware of that. If nothing else sobers us up, the idea of sitting in a jail cell should.”

Though this all looks pretty contentious, Nelson stressed that these sorts of incidents are still relatively rare, and it’s best not to go into an air travel experience expecting tension.

What’s ‘Mu’ strain of Covid? From evading vaccine to transmissibility, everything we know about new Corona variant

What You Should Know About Flying Right...