Facebook today introduced a new set of tools aimed at helping Facebook Group administrators get a better handle on their online communities and, potentially, help keep conversations from going off the rails. Among the more interesting new tools is a machine learning-powered feature that alerts admins to potentially unhealthy discussions in their group. Another lets the admin slow down the pace of a heated conversation by limiting how often group members can post.

Facebook Groups are today are a significant reason why people continue to use the social network. Today, there are “tens of millions” of groups that are managed by over 70 million active admins and moderators worldwide, Facebook says. 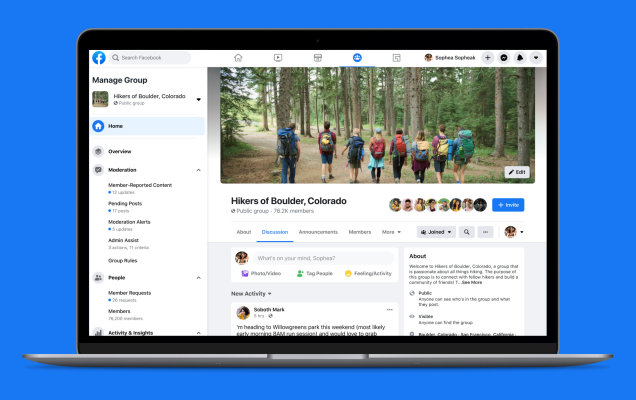 The company for years has been working to roll out better tools for these group owners, who often get overwhelmed by the administrative responsibilities that come with running an online community at scale. As a result, many admins give up the job and leave groups to run somewhat unmanaged, thus turning them into breeding grounds for misinformation, spam, and abuse.

Facebook last fall tried to address this problem by rolling out new group policies to crack down on groups without an active admin, among other things. Of course, the company’s preference would be to keep groups running and growing by making them easier to operate.

That’s where today’s new set of features come in. A new dashboard called Admin Home will centralize admin tools, settings, and features in one place and present “pro tips” that suggest other helpful tools tailored to the group’s needs.

Half a Loaf – TechCrunch