EXPLAINER: Why it takes months to subdue some wildfires

BOISE, Idaho — At nearly every community meeting on the U.S. West’s firefighting efforts, residents want to know why crews don’t simply put out the flames to save their homes and the valuable forests surrounding them.

It’s not that simple, wildfire managers say, and the reasons are many, some of them decades in the making and tied to climate change. The cumulative result has been an increase in gigantic wildfires with extreme and unpredictable behavior threatening communities that in some instances didn’t exist a few decades ago. 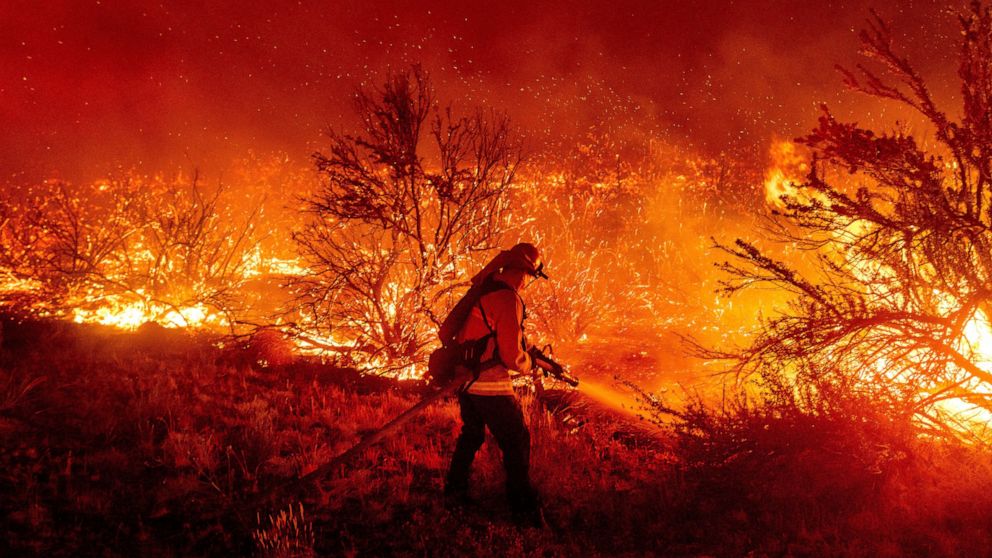 “How do we balance that risk to allow firefighters to be successful without transferring too much of that risk to the public?” said Evans Kuo, a “Type 1” incident commander assigned to the nation’s most significant and most dangerous wildfires. “I wish it wasn’t the case, but it’s a zero-sum game.”

More than 20,000 wildland firefighters are battling some 100 large wildfires in the U.S West. Their goal is “containment,” meaning a fuel break has been built around the entire fire using natural barriers or manmade lines, often created with bulldozers or ground crews with hand tools. Estimated containment dates for some wildfires now burning aren’t until October or November.

Summary show
WHY SO LONG?
HAVE WILDFIRES CHANGED?
IS WILDFIRE SUPPRESSION IN THE PAST PLAYING A ROLE NOW?
HW HAS DROUGHT-IMPACTED WILDFIRE SUPPRESSION?
WHAT ABOUT DISEASE AND INSECT INFESTATION?
ARE MORE HOMES IN WILD AREAS AN ISSUE?
ARE THERE ENOUGH FIREFIGHTERS?

A big concern is a safety. Kuo said residents sometimes plead with him to send firefighters into areas where he knows they could get killed.

Putting out these large fires, or labeling them “controlled,” will require cold weather combined with rain or snow, weeks away for many states.

“I’d say pray for rain because that’s the only thing that’s going to get us out of this fire season,” Idaho’s state forester, Craig Foss, told Republican Gov. Brad Little and other state officials this week during a discussion of the wildfire season.

Kuo has been fighting wildfires for 30 years with the U.S. Forest Service, spending the first part of his career as a frontline firefighter with groundcrews, the backbone of any effort to stop a wildfire. At the time, wildfires of 150 square miles (390 square kilometers) were uncommon. Now blazes reach fives times that size and more, getting large enough to create their own weather. “That’s kind of redefining what the new normal is,” said Kuo. “We get these mega-fires.”

IS WILDFIRE SUPPRESSION IN THE PAST PLAYING A ROLE NOW?

For much of the last century, firefighters had primarily successfully suppressed wildfires in ecosystems that evolved to rely on wildfire. Early on, firefighters benefitted from forests that had already been periodically cleared of brush and debris by wildfires that could move through every couple of decades. But with fire suppression, experts say, that brush and debris accumulated to where now, wildfires can ladder up into the branches and into the crowns of large trees, creating the giant wildfires that kill entire swatches of a forest.

On top of fire suppression have been several decades of drought that studies link to human-caused climate change. That’s exacerbated by this year’s hot and dry weather, leading to historically low moisture contents in forests that have become tinder-dry.

Those dry fuels allow wildfires to spread more quickly. On big fires, embers can shoot out to start spot fires on the other sides of natural barriers such as rivers. Sometimes spot fires can put firefighters at risk of being trapped by flames in front and behind them.

Miller said the state is likely facing $100 million in costs to fight fires this year on land the state is responsible for protecting, predominantly state forests and includes some federal and private forests.

WHAT ABOUT DISEASE AND INSECT INFESTATION?

Disease and bug infestations in trees whose defenses have been weakened by drought have led to forest-wide epidemics that have killed millions of trees in the U.S. West. Those dead trees, called snags, become fuel for wildfires while at the same time posing an increased danger to firefighters who can be hit by falling branches or the hazardous trees themselves.

ARE MORE HOMES IN WILD AREAS AN ISSUE?

Homes built in what firefighters call the wildland-urban interface to pose particular problems, typically tying up many firefighters on structure protection rather than actively engaging a wildfire.

He said homes built with defensible space helps. More people in forested areas, as well as people recreating, has led to more human-caused wildfires. The National Interagency Fire Center in Boise says humans cause about 87% of all wildfires each year.

ARE THERE ENOUGH FIREFIGHTERS?

The nation has just more than 20 Type 1 response teams to handle the nation’s most extensive wildfires fires, and Kuo and his colleagues on those teams, like just about every other firefighting position this year, are in short supply.

He and his crew agreed to work longer than their 14-day shift on the Washington fire to make sure another Type 1 crew would be available.

Josh Harvey, fire management bureau chief for the Lands Department, said about 30% of the state’s firefighters head back to school. Overall, Harvey said there have been widespread shortages of firefighters, fire engines, and logistical support, and the state can no longer rely on help from neighboring states or federal partners. There have even been occasional shortages of jet fuel for retardant bombers in some states. “We’ve never seen anything like it before,” Harvey said. “We are living and making fire history right now.”