BANGKOK — Myanmar’s military-controlled government is seeking to suppress media coverage of protests against its seizure of power as journalists and ordinary citizens strive to inform people inside and outside the country about what is happening. 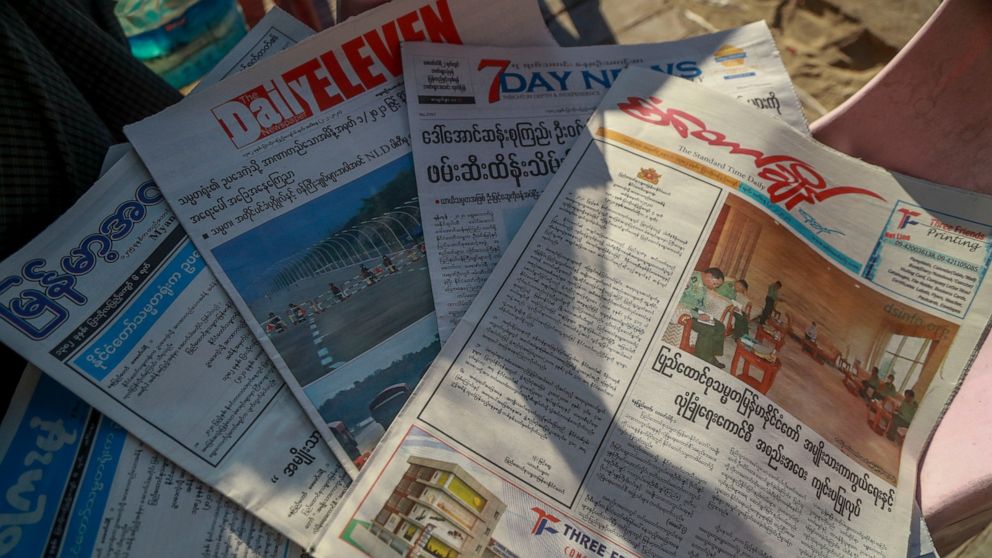 Authorities on Monday canceled the licenses of five local media outlets that had been offering extensive coverage of the protests, attempting to fully roll back such freedoms a decade after the country began its faltering transition toward democracy.

The government has detained dozens of journalists since the Feb. 1 coup, including Thein Zaw of The Associated Press.

The crackdown comes as the military has escalated violence against mass protests. Reports by independent media are still providing vital information about arrests and shootings by troops in cities across Myanmar. And they’re using other platforms to distribute their accounts, such as social media.

Here’s a look at the media situation in Myanmar:

HOW IS THE GOVERNMENT SUPPRESSING NEWS?

Five local outlets — Mizzima, DVB, Khit Thit Media, Myanmar Now, and 7Day News — were banned from broadcasting or providing any information on any media platform or using any technology after their licenses were canceled, state broadcaster MRTV reported. All five had covered the protests extensively and often live-streamed video. Myanmar Now, an independent news service, said that police broke down its office door Monday and seized computers, printers, and parts of the newsroom’s data server. It cited unnamed witnesses and showed a photo of CCTV footage. But it said the office had been evacuated in late January. The government has arrested dozens of journalists, including Thein Zaw of The Associated Press. “This ban is clearly part of a much larger military junta assault on freedom of the press and the ability of journalists to do their jobs without harassment, intimidation, or arrest,” Phil Robertson, deputy Asia director for Human Rights Watch said in a statement Tuesday.

HOW ARE MEDIA OUTLETS RESPONDING?

Myanmar journalists are risking being killed or jailed for doing their jobs. Swe Win, Myanmar Now’s editor-in-chief, said the raid demonstrated the government intends to show zero tolerance for press freedom. “What is certain is that we will not stop covering the enormous crimes the regime has been committing throughout the country,” he said. Mizzima, another privately owned, independent local news outlet, put a statement on its website saying it “continues to fight against the military coup and for the restoration of democracy and human rights” using various online and multimedia platforms. Other outlets also still reported on protests Tuesday. Some of the media outlets already have experience operating from abroad.

WHAT KIND OF MEDIA IS STILL LEGALLY OPERATING IN MYANMAR?

Myanmar appears to be returning to a situation where its officially sanctioned media are entirely state-controlled, as they were before August 2012. Before the coup, under the military-dominated, quasi-civilian government led by Aung San Suu Kyi, reporters faced arrest and harassment for reporting on sensitive topics such as abuses against its Rohingya Muslim ethnic minority. Reuters journalists Wa Lone and Kyaw Soe Oo were given seven-year prison sentences but later pardoned for trying to investigate a massacre of Rohingya civilians. Myanmar ranked 139th of 180 countries in Reporters Without Borders’ 2020 World Press Freedom index. Journalists often have faced criminal prosecution for online defamation. The English-language Myanmar Times announced it had suspended all publications for three months beginning Feb. 21. That move came after many of its staff quit to protest the paper’s agreement to follow a junta order not to use the word “coup” to describe the military takeover. Another state-controlled newspaper, the Global New Light of Myanmar, is still publishing. Other state media include the Myanmar News Agency and army-controlled Myawaddy TV.

WHAT ARE THE LONGER-TERM RAMIFICATIONS?

To suppress all reporting would likely require a complete blackout of all internet and satellite communications. Apart from the legal and human rights implications, that would be a massive setback for the country’s economy. Myanmar’s businesses are highly reliant on the internet, and digital platforms like Facebook have developed quickly in the past few years after decades of relative isolation under previous military governments. So far, the junta has chosen to shut down internet links at night, hindering but not wholly stopping such communications. Since modern businesses rely heavily on the internet and the free flow of communications and information, the military’s actions further damage a business and investment environment devastated by the coup and its aftermath.

Your Guide to Finding the Best Insurance Coverage in NSW

Want To Stop Eating Sugar? Here’s How To Realistically Cut Back.