Esri, the geographic information system (GIS), mapping and spatial analytics company, is hosting its (virtual) developer summit today. Unsurprisingly, it is making a couple of significant announcements at the event that range from a new design system and improved JavaScript APIs to support running ArcGIS Enterprise in containers on Kubernetes.

The Kubernetes project was a significant undertaking for the company, Esri Product Managers Trevor Seaton and Philip Heede told me. Traditionally, like so many similar products, ArcGIS was architected to be installed on physical boxes, virtual machines, or cloud-hosted VMs. And while it doesn’t really matter to end-users where the software runs, containerizing the application means that it is far easier for businesses to scale their systems up or down as needed. 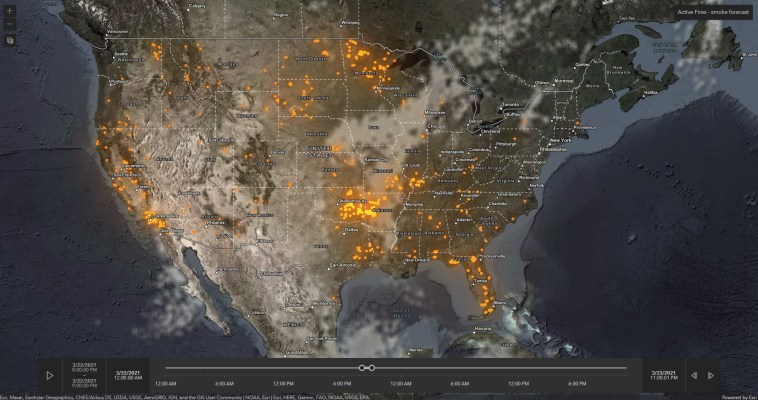 “We have a lot of customers — especially some of the larger customers — that run very complex questions,” Seaton explained. “And sometimes it’s unpredictable. They might be responding to seasonal events or business events, or economic events, and they need to understand not only what’s going on in the world but also respond to their many users from outside the organization coming in and asking questions of the systems that they put in place using ArcGIS. And that unpredictable demand is one of the key benefits of Kubernetes.”

The team could have chosen to go the easy route and put a wrapper around its existing tools to containerize them and call it a day. Still, as Seaton noted, Esri used this opportunity to re-architect its tools and break them down into microservices.

“It’s taken us a while because we took three or four big applications that together makeup [ArcGIS] Enterprise,” he said. “And we broke those apart into a much larger set of microservices. That allows us to containerize specific services and add a lot of high availability and resilience to the system without adding a lot of complexity for the administrators — in fact, we’re reducing the complexity as we do that, and all of that gets installed; in one single deployment script.”

While Kubernetes simplifies a lot of the management experience, many companies that use ArcGIS aren’t yet familiar with it. And as Seaton and Heede noted, the company isn’t forcing anyone onto this platform. It will continue to support Windows and Linux just like before. Heede also stressed that it’s still unusual — especially in this industry — to see a complex, fully integrated system like ArcGIS being delivered in the form of microservices and multiple containers that its customers then run on their own infrastructure.

In addition to the Kubernetes announcement, Esri also announced new JavaScript APIs that make it easier for developers to create applications that bring together Esri’s server-side technology and the scalability of doing much of the analysis on the client-side. Back in the day, Esri would support tools like Microsoft’s Silverlight and Adobe/Apache Flex for building rich web-based applications. “Now, we’re really focusing on a single web development technology and the toolset around that,” Esri product manager Julie Powell told me.

A bit later this month, Esri also plans to launch its new design system to make it easier and faster for developers to create clean and consistent user interfaces. This design system will launch on April 22, but the company already provided a bit of a teaser today. As Powell noted, the challenge for Esri is that its design system has to help the company’s partners to put their own style and branding on top of the maps and data they get from the ArcGIS ecosystem.

Back Then Now – TechCrunch