It’s awesome that we can go outside now and eat at restaurants and do stuff like that, but I think it’s also reminding some of us that allergies are a pain. And also, it’s hot out and heat sucks. Do something about both of those things with the Dyson TP04 Pure Cool Tower air purifier and fan, which is down to $449.99 at Best Buy. That is $100 off what it normally sells for, and you can still find it going for $550 at other retailers like Home Depot. This price is so good it’s even better than refurbished versions being sold at Walmart. Dyson’s devices don’t go on sale very often, and the last price drop we saw was nearly a year ago. The sale won’t last long either since it’s part of Best Buy’s deals of the day. 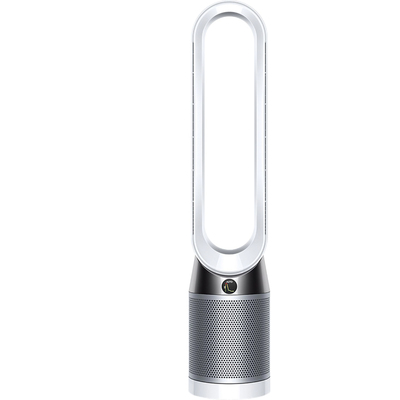 Not only does it cool you down as the weather gets warmer, it also purifies the air. Get rid of gases, odors, and 99.97% of pollutants thanks to the HEPA filter and a 360-degree filtration system. Can automatically react to changes in the air, too.

With Dyson’s unique design, the Pure Cool tower is safe to use anywhere in your home. You can even use it around children because there are no exposed spinning pieces. All the “blades” you’d expect on a traditional fan are secured in the base of the device. The top just pushes the air out and circulates it around the room. You still get all the work of a traditional fan, too, with oscillation up to 350 degrees and direct cooling. There’s even a backwards mode that will purify the air without cooling so you have a full range of options.

The 360-degree filtration system and the built-in HEPA filter help keep your air pure and free from all those little particles that drive you nuts. It has activated carbon and can remove gases and odors. The filters also remove 99.97% of pollutants.

Other features include a night-time mode that will make it do its job in the quietest way possible and a sleep timer so you can program it to turn off after a set interval up to eight hours. Easily replace the filters with a system that will send you notifications when it’s time to replace them.

How to use the Telegram messaging app...

How to turn off auto-updates for games...