ORIENT, Ohio — The rye and rapeseed that Rick Clifton cultivated in central Ohio were coming along nicely — until his tractor rumbled over the flat, fertile landscape, spraying it with herbicides.

These crops weren’t meant to be eaten but to occupy the ground between Clifton’s soybean harvest last fall and this spring’s planting. Yet, thanks to their environmental value, he’ll still make money from them.

Farmers increasingly have been growing offseason cereals and grasses to prevent erosion and improve the soil. Now, they’re gaining currency as weapons against climate change. 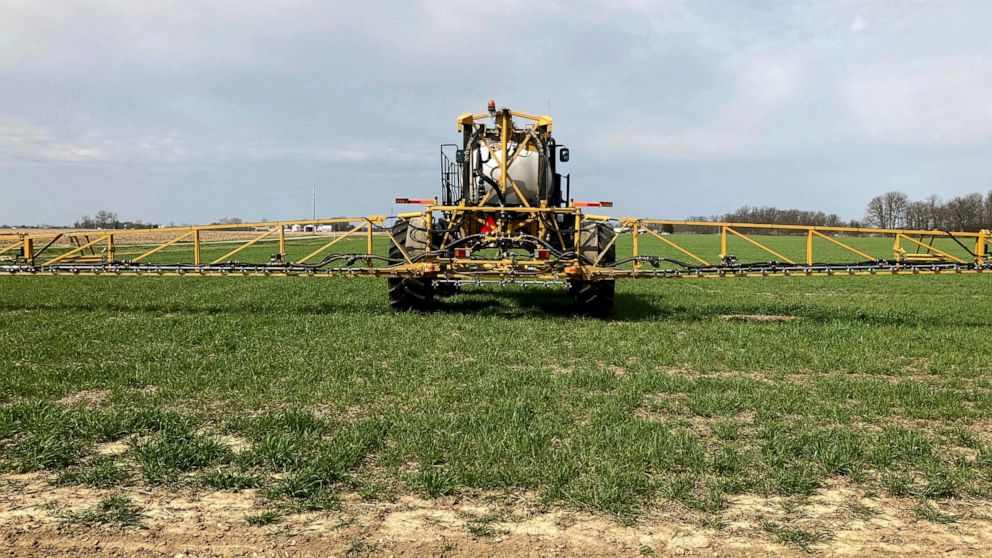 Experts believe keeping the ground covered year-round rather than bare in winter is among practices that could reduce emissions of planet-warming gases while boosting the agricultural economy if used far more widely.

“For too long, we’ve failed to use the most important word when it comes to meeting the climate crisis: jobs, jobs, jobs,” President Joe Biden said in his April address to Congress. One example, he added: “Farmers planting cover crops so they can reduce the carbon dioxide in the air and get paid for doing it.”

Clifton, 66, started growing cover crops several years ago to improve corn, soybean, and wheat yields. Then he read about Indigo Agriculture, a company that helps businesses and organizations buy credits for carbon bottled up in farm fields. He signed a contract that could pay about $175,000 over five years for storing greenhouse gases across his 3,000 acres (1,214 hectares).

“If you can get something green on the ground year-round, you’re feeding the microbes in the soil, and it’s a lot healthier,” he said, touring a barn loaded with cultivating and harvesting equipment. “And if somebody wants to pay you to do that, it looks to me like you’re foolish not to do it.”

Agriculture generates about 10% of U.S. greenhouse gas emissions: methane from livestock, nitrous oxide from fertilizers, carbon dioxide from machinery. All industries are under pressure to reduce emissions, primarily by switching to renewable energy.

But farming has something most others don’t: the ability to pull carbon dioxide, the most prevalent climate-warming gas, out of the atmosphere and store it. Plants use it in photosynthesis, their process of making food.

Agriculture won’t be “the sole solution, but I see it as a solid plank in an overall program to address climate change over the next few decades,” said David Montgomery, a University of Washington geologist.

Some caution against overselling farmland’s potential. Iowa State University ecologist Steven Hall says that microbes convert carbon absorbed by cover crops into gas that returns to the atmosphere at some soil depths.

“It may make sense to pay farmers to do this,” he said. “But I would go into it a bit more suspicious that we’ll get a maximum performance on all farms.” The federal government has spent hundreds of millions of dollars helping farmers make environmentally-friendly changes. Since 2005, those actions have produced an eight-fold increase in reducing greenhouse gas emissions, the NRCS says.

The latest U.S. Census of Agriculture in 2017 found more farmers were switching from conventional soil tilling, a significant source of carbon pollution, to reduced or no-till practices. It also recorded a 50% increase in cover cropping over five years.

But the 15.4 million acres (6.2 million hectares) planted in cover crops were just 6.7 % of the land suitable for it. Biden has ordered the Department of Agriculture to craft a plan for making such practices so standard that the U.S. farm industry would become the world’s first to achieve net-zero emissions.

Supporters say unless the actions are mandatory, which farmers resolutely oppose, more financial incentives will be needed. The agriculture department is consulting industry groups about tapping the $30 billion Commodity Credit Corp., which helps keep farm incomes and prices stable, to establish a “carbon bank” that could pump in more funds.

The Boston-based company’s agronomists help producers adopt the techniques. It uses farm management data, soil sampling, and modeling software to calculate credits based on volumes of gases pulled underground or prevented from being generated.

IBM, J.P. Morgan Chase, and Barclays are among buyers of Indigo’s credits. Farmers currently get $15 for each metric ton ($15 per 1.1 ton) of carbon, with payments phased over several years.

“I want to make our farm better for the fourth generation,” said Unger, 33, strolling through corn stubble in a field he now tills more lightly than before. He also uses cover cropping and more efficient fertilizing, which reduces nitrous oxide emissions.

Still, some farmers are reluctant to change habits ingrained over generations. Others wonder whether carbon markets will work. Pending U.S. Senate and House bills would help farmers get started and provide third-party inspections to verify improvements. The chief Senate sponsor, Agriculture Committee Chairwoman Debbie Stabenow of Michigan, said attitudes have changed since she unsuccessfully proposed a similar program in 2009.

“Farmers have been hit right in the head with one weather disaster after another. They know the climate is changing,” the Democrat said. The measures have bipartisan sponsorship and support from industry groups such as the American Farm Bureau Federation. The Environmental Defense Fund is among green organizations backing it.

But an opposing coalition of other environmentalists and small-farm groups says credit markets let corporate polluters outsource carbon reduction instead of mending their own ways.

The critics told Congress that farmers who adopt the newer land management practices could abandon them later. “Without adequate measurement tools or guarantees of permanence, quantifying soil carbon to use in a carbon market becomes a guessing game and does not guarantee actual reductions in greenhouse gases,” they said.

Bruno Basso, a Michigan State University soil and plant scientist, said farmers are unlikely to resume old ways after seeing how the changes benefit their lands. Carbon storage methods and technology to assess their performance are improving, he added.

Such complex data analysis lends credibility to eco-friendly agriculture, once widely associated with “offbeat farmers,” said Keith Paustian, a soil and crop scientist at Colorado State. “It seems to some degree utopian, but what is best for the planet can also be what’s best for farmers and society,” he said.

Follow John Flesher on Twitter: @johnflesher The Associated Press Health and Science Department receives support from the Howard Hughes Medical Institute’s Department of Science Education. The AP is solely responsible for all content.