WELLINGTON, New Zealand — In the end, the buildup seemed to eclipse the finale. People across New Zealand and worldwide stayed up Wednesday to watch a cosmic event called a super blood moon, a combination of a total lunar eclipse and a brighter-than-usual supermoon.

During the buildup, a glittering moon rose above the horizon. As the Earth’s shadow began taking bites from the moon, it created a dramatic effect. Half the moon vanished, leaving it looking like a black-and-white cookie.

However, when the total eclipse took hold, the moon darkened, turning a smudgy burnt orange color for many viewers. In celestial terms, it was a wonder: a projection of the world’s sunsets and sunrises onto the black canvas of the eclipsed moon. But for people peering up from their backyards, it wasn’t the pretty brilliant display they’d anticipated. Not quite super or blood-colored. 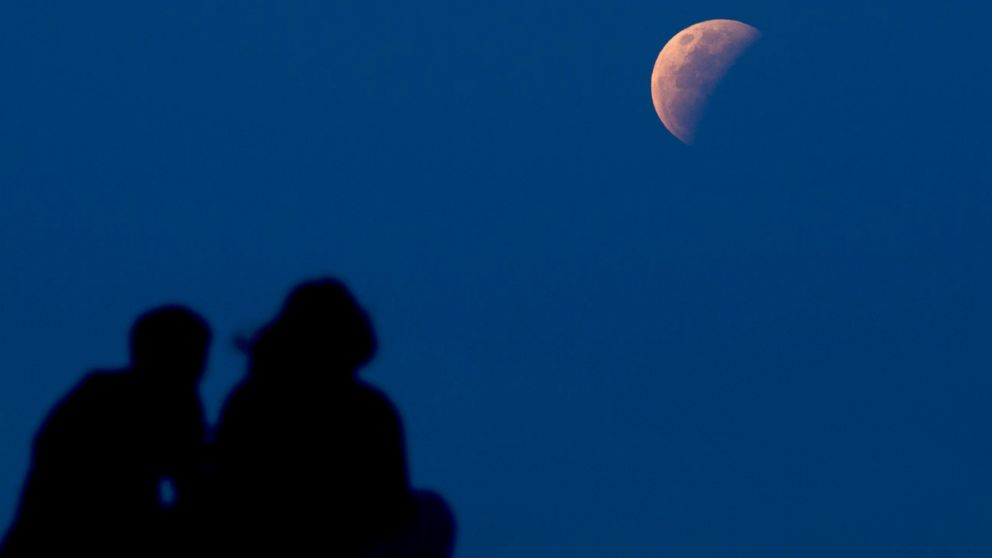 “It was not that vivid for those on the ground,” said Ben Noll, a meteorologist with New Zealand scientific research agency NIWA. “Personally, I thought there would be a bit redder in the sky.”

Still, Noll thought that overall, the evening was sensational. He heard plenty of people cheering and cars honking in downtown Auckland where he watched it all unfold.

John Rowe, an educator at the Stardome Observatory & Planetarium in Auckland, said it was like the moon turned into a big, spooky smile looking down at him. That’s because of a bright rim that remained at the bottom.

Rowe also enjoyed seeing surrounding stars appear to brighten as the light from the moon dimmed. The total eclipse lasted about 15 minutes, while the whole cosmic show lasted five hours. A partial eclipse began as the moon edged into the Earth’s outer shadow, called the penumbra, before moving more fully into the primary shadow and reversing the process.

Rowe likes to imagine it as if he’s standing on the moon. The Earth would come across and block out the sun. The reddish light around the edges would be the sunsets and sunrises happening at that time on Earth, projected onto the moon’s surface. Pretty cool, he reckons.

During the total eclipse, the moon’s color can appear different depending on where people are in the world and by factors like the amount of dust in the atmosphere and global weather.

In much of New Zealand, the weather remained calm and clear on Wednesday, providing excellent viewing conditions. The same was true in Australia, although those in South Korea struck out because rain and cloudy weather obscured the eclipse across much of the country. There also was disappointment in Japan because of cloudy weather, with many posting messages like “I can’t see anything” on Twitter.

Some Pacific and East Asia places got to see the show before midnight, while night owls in Hawaii and the western part of North America got to watch it in the early morning hours.

Sky gazers along the U.S. East Coast were out of luck because the moon was setting and the sun rising. Europe, Africa, and western Asia all missed out as well. In Anchorage, Alaska, Doug Henie didn’t know what to expect from his first lunar eclipse. He and his wife saw just a sliver of the moon as they drove to a prime viewing spot on a hill off a winding road between Cook Inlet and the Anchorage airport.

Once they arrived, he set up his camera as the eclipse neared totality just after 3 a.m. local time, when it looked more like dusk than night. That’s because Anchorage had more than 18 hours of sunlight on Wednesday.

“It’s kind of cool,” Henie said. “I was kind of hoping to see a little more action, I guess, but now it’s lightened up. The light is certainly coming back.”

In Hong Kong, Dickson Fu left early to watch the eclipse from a seaside promenade in the Sai Kung neighborhood. Fu, president of Hong Kong’s Sky Observers’ Association, picked that particular spot because it would give him an unobstructed view.

“In recent years, I’m more interested in taking photos, and in the past few days, I have already done rehearsals, testing out equipment such as the camera and lenses,” said Fu.

For those living in places where the eclipse wasn’t visible, there were live streams available. And everyone around the world got to see the bright moon, weather permitting. It was the first total lunar eclipse in more than two years.

The moon was more than 220,000 miles (357,460 kilometers) away at its fullest. This proximity, combined with a full moon, qualified it as a supermoon, making it appear slightly more prominent and more brilliant in the sky.