BEIJING — The Biden administration’s solar power ambitions are colliding with complaints the global industry depends on Chinese raw materials that might be produced by forced labor.

A big hurdle is polysilicon used to make photovoltaic cells for solar panels. The global industry gets 45% of its supply from Xinjiang, the northwestern region where the ruling Communist Party is accused of mass incarceration of minorities and other abuses. Other parts of China supply 35%. Only 20% comes from the U.S. and other producers. 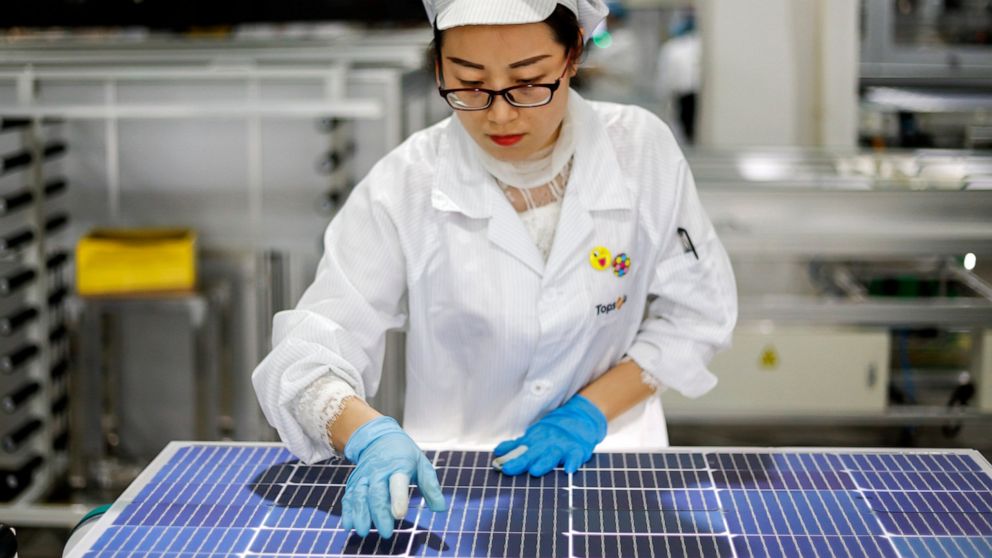 Biden’s climate envoy, John Kerry, says Washington is deciding whether to keep solar products from Xinjiang out of U.S. markets. That sets up a conflict with President Joe Biden’s plans to cut climate-changing carbon emissions by promoting solar and other renewable energy while reducing costs.

In Xinjiang, more than 1 million Uyghurs and other members of predominantly Muslim ethnic groups have been forced into detention camps, according to foreign researchers and governments. Authorities are accused of forced sterilizations of minorities and of destroying mosques.

Chinese officials reject accusations of abuse and say the camps are for job training aimed at economic development and deterring radicalism. The U.S. and some Chinese solar vendors have pledged to avoid suppliers that might use forced labor. However, it isn’t clear whether they can meet rising demand without Xinjiang, where Beijing won’t allow independent inspections of workplaces.

The most prominent manufacturers all use raw materials from Xinjiang and have a “high risk of forced labor in their supply chains,” according to a May 14 report by researchers Laura T. Murphy and Nyrola Elima of Britain’s Sheffield Hallam University.

The possibility of forced labor “is a problem,” Kerry told U.S. legislators last week. He cited “solar panels that we believe in some cases are being produced by forced labor.”

Western governments have imposed travel and financial restrictions on Chinese officials blamed for abuses. The U.S. government has banned imports of cotton and tomatoes from Xinjiang, citing concerns over forced labor.

Kerry said that the administration was assessing whether to extend that ban to solar panels and raw materials from Xinjiang. He said he didn’t know the status of that review.

The government’s “labor transfer” program is at issue, which places workers in Xinjiang with companies. Chinese officials say it is voluntary, but Murphy and Elima argue it takes place in “an environment of unprecedented coercion” and is “undergirded by the constant threat of re-education and internment.”

“Many indigenous workers are unable to refuse or walk away from these jobs,” their report says. It says the programs are “tantamount to forcible transfer of populations and enslavement.”

Murphy and Elima found 11 companies engaged in forced labor transfers of Uyghurs and other minorities and 90 Chinese and foreign enterprises whose supply chains are affected. They said manufacturers need to make “significant changes” to avoid suppliers that use forced labor.

Trina and JinkoSolar also have “possible labor transfers” in factories, while a JinkoSolar facility is in an industrial park that also has a prison, according to Murphy and Elima.

JinkoSolar, LONGi, Trina, and J.A. Solar didn’t immediately respond to questions about the report. At the same time, a supply crunch as demand surges has boosted polysilicon prices more than 100% since January to a 9-year high.

The market is “already undersupplied,” Johannes Bernreuter, head of Germany’s Bernreuter Research, said in an email. China is both the most significant global market for solar equipment and the biggest producer.

That reflects multibillion-dollar government spending over the past two decades to promote solar energy. The ruling party wants to curb reliance on imported oil and gas, which it sees as a security weakness, and take the lead in an emerging industry.

A supply glut as hundreds of Chinese manufacturers rushed into the industry 15 years ago drove prices down. That hurt Western competitors but accelerated the adoption of solar in the United States and Europe.

Seven of the top 10 global producers are Chinese. Canadian Solar Inc. is registered in Canada, but its production is in China. South Korea’s Hanwha Q-Cells is No. 6.

The only U.S. producer in the top 10, First Solar Inc., has no exposure to the Xinjiang polysilicon supply chain because the Tempe, Arizona, company uses thin-film technology that requires no polysilicon.

Vendors serving U.S. and European markets probably can get enough polysilicon outside Xinjiang, Bernreuter said. But he told supplies might be squeezed if other countries impose the exact requirement.

However, those companies also might buy raw materials from Xinjiang’s biggest supplier, Hoshino Silicon Industry Co., according to Murphy and Elima. They cited documents that show Hoshino, also known as Hesheng, participates in “labor transfer.”

Hoshino didn’t immediately respond to questions about the report. U.S. solar equipment vendors have been trying since last year to overhaul supply chains to eliminate problem suppliers, according to their trade group, the Solar Energy Industries Association.

In February, 175 companies, including the U.S. arms of JinkoSolar, LONGi, Trina, and J.A. Solar, signed a pledge to oppose the use of forced labor by their suppliers.

According to the group’s president, Abigail Ross Hopper, potential changes should be made by the end of June. “If their customers and the U.S. government are demanding it, they will need to move quickly,” Ross Hopper told P.V. Magazine USA in February. Bernreuter warned the Chinese government “might interfere” with an overhaul, though no sign has happened.

What were the last two eyeshadow palettes you paired together?

After decades in eye of storms, weather...