Auric Temper Smoke Reflect Eye Shadow Duo ($39.00 for 0.23 oz.) includes a sparkling powder eyeshadow and a cream eyeshadow. The cream eyeshadow was the better performer between the two, as the texture of the sparkly eyeshadow was on the drier side and felt a little too compacted in the pan, so it wasn’t as easy to work with. FYI, the powder product contains plastic (PET) glitter. 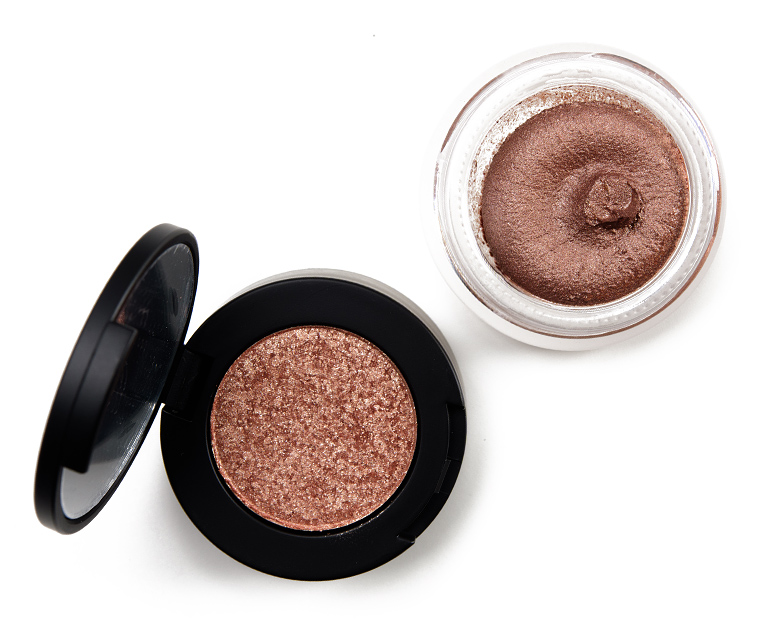 Temper (Powder) is a light, rosy copper with moderate, warm undertones and flecks of glitter and sparkle throughout. This shade contained plastic (PET) glitter and flash (the other shades in this formula did not contain plastic glitter). It had semi-sheer, buildable pigmentation but was best applied with a dampened brush due to the drier, firmer texture. The texture seemed to get more compacted over time rather than loosening or getting more forgiving, unfortunately.

It felt too-firmly pressed into the pan, which resulted in a product that was harder to pick up with a dry brush and seemed more reactive to natural oils on the fingertips, which is why a dampened brush appeared to be the best course of action. The surface hardened a bit after a few uses with fingertips in particular. It applied pretty evenly to bare skin, but it was more prone to fallout than other shades in the line, especially when I went to diffuse/blend out the edges. It lasted for eight hours but had light fallout over time.

Temper (Cream) is a light-medium, rosy bronzer with warmer undertones and a smooth, pearly sheen. It had opaque color coverage that could be sheered out (or used with less product) evenly. The consistency was lightweight, mousse-y in the pot but had good glide and adhesion without losing its intensity.

It had more playtime than some cream eyeshadows, so it did seem to pull into my lines along the inner lid area (though not so much my crease) as it was dying down, and I had to smooth it back out as it was drying down. Once I did that, though, I didn’t get additional creasing/settling until after eight and a half hours of wear.

They had a moderate dry downtime; they did dry down to a more powder-like finish that wasn’t budge-proof–I could still soften the edges a bit–but had a tendency to settle into my fine lines on the inner lid area as it was drying down, so I had to buff the product back out to even the product out. Once I did this, it didn’t keep creasing after the dry down. If I applied and buffed out the product as a sheerer layer of development, this wasn’t an issue as less product was more apt to dry down relatively quickly than a more opaque layer of product.

The consistency dried down but wasn’t thick, heavy, or inflexible, so it paired well with other powder eyeshadows (not just the one included with it). It could be used as an eyeshadow base or eyeliner as well. Aside from the initial creasing (which I could blend/buff out) as it was drying down, once it dried down, I didn’t get creasing until the eight to nine-hour mark.