Officials at the Pompeii archaeological site in Italy have announced the discovery of an intact ceremonial chariot, one of several important discoveries made outside the park following an investigation into an illegal dig.

MILAN — Officials at the Pompeii archaeological site in Italy announced Saturday the discovery of an intact ceremonial chariot, one of several important discoveries made in the same area outside the park near Naples following an investigation into an illegal dig. 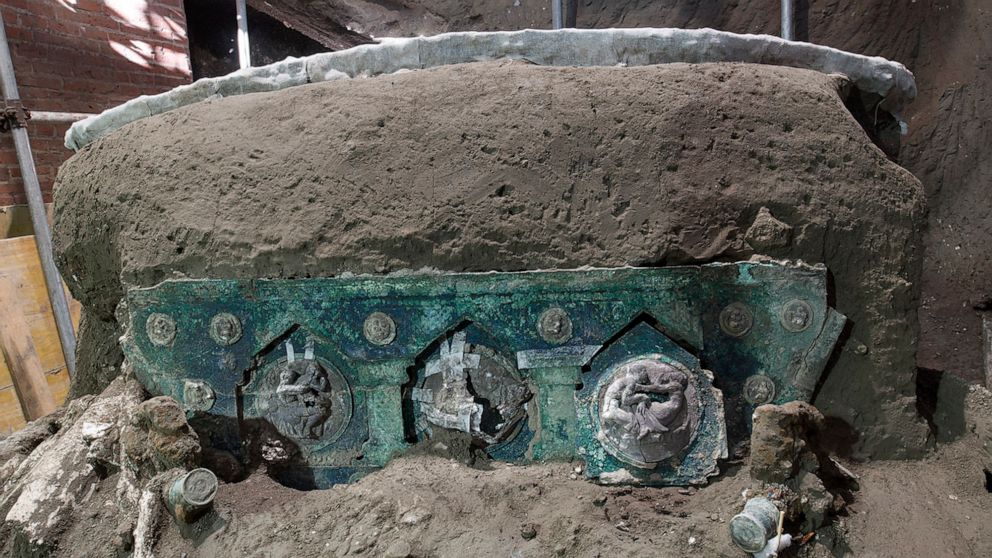 With its iron elements, bronze decorations, and mineralized wooden remains, the chariot was found in the ruins of a settlement north of Pompeii, beyond the walls of the ancient city, parked in the portico of a stable where the remains of three horses previously were discovered.

The Archaeological Park of Pompeii called the chariot “an exceptional discovery” and said, “it represents a unique find – which has no parallel in Italy thus far – in an excellent state of preservation.”

The eruption of Mount Vesuvius in 79 AD destroyed Pompeii. The chariot was spared when the walls and roof of the structure it was in collapsed and survived looting by modern-day antiquities thieves, who had dug tunnels through to the site, grazing but not damaging the four-wheeled cart, according to park officials.

The chariot was found on the grounds of one of the most significant ancient villas in the area around Vesuvius, with a panoramic view of the Mediterranean Sea. on the outskirts of the ancient Roman city.

Archaeologists last year found in the same area on the outskirts of Pompeii, Civita Giulian, the skeletal remains of what is believed to have been a wealthy man and his male slave, attempting to escape death.

The chariot’s first iron element emerged on Jan. 7 from the blanket of volcanic material filling the two-story portico. Archaeologists believe the cart was used for festivities and parades, perhaps also to carry brides to their new homes.

While chariots for daily life or the transport of agricultural products have been previously found at Pompeii, officials said the new find is the first ceremonial chariot unearthed in its entirety.

The villa was discovered after police came across the illegal tunnels in 2017, officials said. Two people who live in the houses atop the site are currently on trial for allegedly digging more than 80 meters of tunnels.