Alexa von Tobel, co-founder and managing partner of Inspired Capital, will be joining TechCrunch Disrupt 2021, taking place September 21-23, to help judge the startups competing in Startup Battlefield. NOTE: Applications are now open, so don’t hesitate to throw your hat in the ring here!

Before Inspired Capital, Alexa founded LearnVest in 2008, intending to help women, in particular, make better investments and learn financial planning. After raising $75 million in venture capital and growing the service to 1.5 million users, LearnVest was acquired by Northwestern Mutual in May 2015 for $250 million. 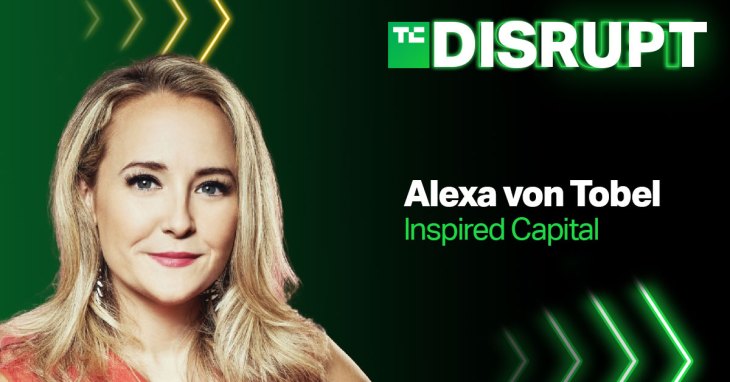 Following the acquisition, Alexa joined the management team of Northwestern Mutual as the company’s first chief digital officer. She later assumed the role of chief innovation officer, a position in which she oversaw Northwestern Mutual’s venture arm.

Alexa, who holds a Certified Financial Planner designation, is also The New York Times-bestselling author of “Financially Fearless,” which debuted in December 2013. Its follow-up, “Financially Forward,” arrived in May 2019. She is also the host of “The Founders Project with Alexa von Tobel,” a weekly podcast with Inc. that highlights entrepreneurs.

Alexa is a member of the 2016 Class of Henry Crown Fellows and an inaugural member of President Obama’s Ambassadors for Global Entrepreneurship. She has been honored with numerous recognitions, including a Forbes Magazine cover story, Fortune’s 40 Under 40, Fortune’s Most Powerful Women, Inc. Magazine’s 30 Under 30, and World Economic Forum’s Young Global Leader.

Alexa recently joined us at TechCrunch Early Stage, where she led a breakout session on financial planning explicitly targeted at startups. Join us at Disrupt this September and get your ticket for under $100 for a limited time!